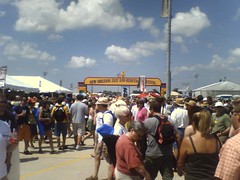 New Orleans was not what I expected. It is hot, and it is humid, but those are, respectively, the first and last items on the list of my met expectations. Mostly in a good way. I remain unconvinced it’s actually part of the continental United States, but since when has that been a bad thing? A few reactions.

The Lack of Evident Destruction

While I was peripherally aware of some of the progress that had been made rebuilding, my mind’s eye still held firm on an image of the thousands of ton oil platform that Katrina piled up on the Louisiana coast like it was a erector set construction. To the pleasant surprise of the non-residents in our ad-hoc collection, however, the downtown area and French Quarter are mostly up and running. Visible water damage here and there, but otherwise intact. There are sections of town, I’m told, that remain not only devastated but essentially lawless and devoid of infrastructure – particularly west of I-10, but the parts of town that will fuel tourism – and indirectly reconstruction – are in fine shape. Said differently: visit, please.

Yes, it’s trite. Yes, it’s something of a tourist trap. But, oh, what a trap. I can honestly say that I’ve never experienced anything quite like it. Forget the obvious debauchery and questionable behavior. Or try to, anyway – it’s fairly in-your-face, particularly for someone like me. Look instead at the architecture, which elevates Southern Gothic from mere descriptive phrase to fleshed out description. Wander freely, jaw agape, in what’s one of the only remaining venues I know of that has no open container law with regard to liquor. Make sure, of course, you have your “go cup” – the cheap plastic Solo container they ask you to house your drink of choice in before venturing out into the night. Or day. Would I be in favor of drive-thru dacquiri joints in Denver, or Maine? Probably not. But if you’re looking for different, that’s tough to top.

As someone born and raised well north of the Mason-Dixie line, the sum total of my exposure to southern culture can be expressed in a rather simple set of variables: x being some # of spring breaks, y some # of business trips, and z some # of (ex)girlfriends. In some cases, those particular datapoints confirmed previously existing impressions (an obvious euphemism for “stereotypes”). In others, they laid them to waste. None of it, however, remotely served as preparation for the culture of New Orleans.

The local patois is at once the most obvious manifestation and the least important. While the accents were often as impenetrable to me as my fast-talking northern dialect has proven for southern raised grandparents, the content of the necessary communications – “Casamento‘s, on Napoleon and Magazine, s’il vous plaît” – proved to be fairly universally understood. The sentiment and attitudes of the people we encountered over the three days bled right through the language barriers, unsurprisingly. Stranded out in the sultry and green west of the French Quarter, waiting for a cab to convey us to the surface of the Sun or Jazzfest, whichever, one actually stopped to politely inform us that he already had a promised fare two blocks down, but with their permission he’d circle back around and pick us all up. Never seen that before. And then there was the person working the door at the casino; who didn’t want my offered driver’s license, but preferred to ask me, personally, how old I was (now is not the time to remind the audience of the obviously few gray hairs occupying my head). Startled by this display of trust or naivete, depending perhaps on where you hail from, I got it wrong. Second time was the charm.

These are, if such a generalization can be applied, nice people. Not all of them, obviously – one of the members of our party was the repeated subject of multiple but apparently entirely random taunts and idle threats at Jazzfest. The folks in the Gospel Tent, I’m happy to report, were far more hospitable, if a bit excitable on the dance floor.

To get the merest hint of an impression of an idea of what the culture of the place is like, think Old World charm plied with a few cocktails. Not bourbon, that’d be too cliche. Gin, maybe. Then apply – liberally – oysters, crab legs, and shrimp.

While technically speaking I wasn’t raised in New England, it often feels to both myself and my NYC-living brother that we were. And as a former and part-time resident, I can tell you that New England loves its seafood.

I should know. I’ve had to choke down bluefish pate – one of the foulest substances known to mankind (apologies to its fans in the audience, but it’s an unmitigated evil) – at family gatherings. I used to spend summers drop fishing for buckets of flounder on the Cape (this was in the pre-cut days), which would then form the basis of breakfast, lunch and dinner for the duration of our stays with my grandfather (the likely root cause for my fear of bones in food – flounder bones being tiny, sharp and terrifying, in that order). More problematic, I used to go crabbing with an older cousin in a leaky skiff. Inevitably, at some point, the skiff would reach a leak tipping point that transitioned the caught and basketed blue crabs to free roaming crabs, who promptly delivered swift, claw-facilitated vengeance on a young sog. The Most Dangerous Catch, indeed. So yes, I can tell you that New England loves its seafood.

I can also tell you that New England doesn’t love its seafood half as much as New Orleans does. Probably not even a quarter. These people love seafood the way that New Yorkers love pizza and bagels, the way that Boston’s North End loves Italian food and Chinatown loves, well, Chinese food. Realize ahead of time that seafood is going to be a staple of pretty much every menu you see. If you’re allergic to shellfish, as my future brother-in-law was, you’ll get by – it’s a city, after all. But you’re going to miss out. Because the shrimp, just as Forrest Gump’s friend implied, will be cooked in virtually every fashion imaginable. Many of which are excellent; who knew a shrimp sandwich with freshly made cocktail sauce would be so appetizing? Not I. And if you think it’s just shrimp that goes on the sandwiches, or po’boys as they’re referred to and ordered, you didn’t listen: they love seafood here. Oyster sandwiches, soft-shelled crab sandwiches, prawn sandwiches, whatever. Somewhere, someone will put it in a po’boy for you. Whether you like it or not.

Would I go back? Most certainly. I couldn’t live there, as it’s not quite my cup of tea. First, there’s the kiln-like temperatures and miasma/humidity, and second it’s got a distinctly Vegas-edge to it in parts – and Vegas just isn’t my idea of a good time – but I’d choose it over Vegas every day of the week and twice on Sunday. With all due respect to the Vegas fans in the audience – and I think at least one resident – New Orleans is to authentic as Vegas is artificial. Reasonable minds may disagree, of course, and YMMV, as always.

Would I bring a family or significant other to New Orleans? Perhaps, although I’d probably steer them clear of the baser elements of Bourbon Street. If you’re at all socially conservative, in fact, you’ll want to avoid Bourbon St altogether. Probably Harrah’s as well. But who could visit and skip the Old Absinthe House? Either way, from what I gleaned in my in and out schedule, there’s a lot to New Orleans – far more than I expected. What is sog’s final score for New Orleans, on baseball’s 2-8 scale? A solid 6. Congrats to the residents: you’ve come a long way since Katrina, and you have a lot to be proud of.