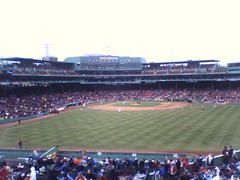 In what leading scientists believe was a miracle, the Boston Red Sox actually did get to play a ballgame on Monday. I didn’t believe they would when I got up before 5 and looked out the window, I didn’t believe it while slaloming between downed trees and lake size pockets of standing water, and I certainly didn’t believe it when I got to Boston and it looked like this. But as the three weather services the Sox subscribe to had predicted, the great big tap in the sky was finally turned off around noon and play commenced. First pitch came from a descendant of Samuel Adams – the patriot, not the guy on the taps at airport bars.

Against all – or at least most – odds it turned out to be a great day to be at the ballpark. The pitching turned in was superb, although I had my doubts when Cabrera launched a second inning shot, and the offense batted around in the first inning. What more can one ask for? Ok, maybe a bit of sun, and temperatures over 40. But in the absence of such things, the day came off about as well as could be expected. Any day, after all, that ends with the Standells banging out “Dirty Water” is a good day in my book.

Interestingly, the park at game time was as empty as I’ve ever seen it. In any other town, the surprise would be if the park wasn’t empty, but this is Boston, and these are the Red Sox – we take our baseball very, very seriously. My assumption is that folks were banking on the oft-heard rumor that the game wouldn’t actually get started until 3 or 4 in the afternoon. The Cask appeared to be doing just fine, however, before, during and after the game. Surprising that a place full of booze would do well on a miserable day, but there you go.

The good times continued following the game, as I took leave of my hardy companions – only one of whom bailed out on attending – and met up with a friend for an excellent dinner in Brighton.

Things took a bit of a turn for the worse once I headed back for Maine, however. First, I was so tired from a.) an out of whack sleep schedule from the previous day’s red eye and b.) a 4:30 AM wakeup (it was just as horrifying as it sounds) that I had to catnap in both the New Hampshire and Maine rest areas. Second, was the inexplicable darkness of the homestead – I’d left the exterior lighting on when I left at the crack of dawn – which my sleep addled mind eventually deciphered as an indication that the storm had knocked out our power. This was problematic for all of the obvious reasons – candles are never where you think they should be and so on – as well as some non-obvious ones: both my laptop and cellphone were bone dry batterywise. Meaning that taking my Tuesday morning calls from the house was no longer realistic – I ended up heading down to Portland (thanks for the power and wifi, Starbucks on Congress Ave).

Couple the lack of power with the construction related lack of running water, and it’s a recipe for an interesting visit. While I displayed what I believe to be adequate adaptability, showering by candlelight with a bucket of stove heated Poland Spring water in a room that’s ambient temperature is a bit below 50 degrees wasn’t really what I had in mind.

But you know what? Of course you do – you’ve heard me say this how many times now? It was all worth it. Every bit of it. And I’m not sure if I would have changed things if I could. Ok, I probably would have had running water, but the rest of it was fun. It’s easy to sit back and let one day spin into another, but I’d rather try to inject a little randomness into the equation – even if it does mean going to bed clad fully in fleece.