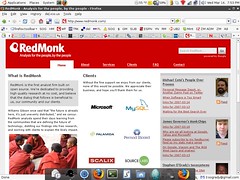 While the timeframe for delivery was regrettably Vista-like, I’m quite pleased to announce that we’ve officially relaunched redmonk.com. As is the custom these days, we’re considering the site a public ‘beta’ launch, mostly as an excuse for the occasional typo or missing link, but also because we’ve got a couple of other pieces on the horizon. For those that are interested, here’s the inside baseball on the project. In the Q&A format, of course.

Q: Let’s begin with a brief history of the old site: how and when was that designed?
A: RedMonk V1 was designed way back in late 2002, when we were just another analyst firm trying to get off the ground. It was initially deployed on top of an IIS/ASP based content management system that our original designer was familiar with, but following a migration to Linux we dropped the .asp templates and had it converted to straight HTML. Thus it has been for years now. Too many years.

The design served us well, to be sure, and had many fans following its launch. But ultimately, as any site will, it got a bit long in the tooth and was difficult to keep updated as just a bunch of static pages (though they did render fast). Put simply, the site, which sees a fair amount of traffic these days, continued to represent us poorly, mostly because it was an accurate representation of who we were four years ago, rather than who we are today.

Q: So when did you start thinking about revising the site?
A: James and I had been talking about a revamped redmonk.com for at least two years, and had more than a few false starts with different designers. The project, to be frank, had stagnated and become something of a quagmire: we knew we needed to do something, but we were all busy on other projects and our previous investments to solve the problem – both in time and money – didn’t yield the dividends we expected. Not to place the blame entirely on the designers; we certainly were not ideal customers, as we had a variety of opinions internally on what the site should like, who it was intended to serve, and so on.

Q: When did things start to look up?
A: The turning point in the redesign was the successful relaunch of our individual blogs, which was done by Alex. With that success to build from, Alex and I began discussing the possibility of a redesign for the home page, we vetted a couple of concepts, and then several weeks back I got the templates that form the foundation for the new site. The rest, as they say, is history.

I’m interested in seeing what the public reaction will be, but I quite like the new design. Validating that opinion, the initial reaction from the IRC and Twitter channels is more or less universally positive.

Q: The real question on everyone’s mind is undoubtedly this: what happened to the zombie guy?
A: As much as everyone liked the scary faceless dude of RedMonk 1.0, it was time for a change. So he’s been retired. The original version of RedMonk 2.0 had a group shot of the three of us to replace it, but none of us are real lookers and group shots are both boring and conventional (things we try not to be). So instead we cruised on over to Flickr, did a simple search for Creative Commons licensed content featuring red monks, found the excellent shot currently on the home page, and dropped it in. We’ve already gotten a couple of compliments on it, and I think it fits pretty well. Let us know what you think.

Q: Ok, let’s start with search – what’s the difference between the new site and the old site?
A: Well, the flip answer is that we actually have search now. Previously, RedMonk’s content was only searchable via the individual blog interfaces – definitely a suboptimal experience from a visitor perspective. This time around, we’ve added the standard Google search box that allows for cross-site search so you’ll turn up all the relevant results with just a single query. Nothing fancy, but it gets the job done. Plus I’m not all that fond of WordPress’ built in search engine.

Q: Ok, what about the live event and news data?
A: The Recent Press links are very simple: they’re pulled dynamically from del.icio.us. James tags articles mentioning us appropriately, and they simply appear. No fuss, no muss.

The event data is a bit more complicated. They are likewise inserted dynamically; this time from our “redmonkers” account over at Upcoming.org. This integration was made possible via a lightweight iCal WordPress plugin that Alex developed on our behalf. The current plan is to release that, as well, so stay tuned there.

Q: And how about the feed data?
A: What or how to integrate blogs was a subject of heavy debate internally. The long and the short of it is that I was outvoted, and we’re dedicating good real estate to our blogs, which is certainly not inappropriate given their significance to our business. Visitors to redmonk.com will see links of our most recent articles and links to our individual feeds.

Q: Any other pages worth calling out?
A: Well, the Contact page is interesting. First of all, it should be more useful, as it goes beyond the old address/email/etc to include IM handles, an IRC link, timezone info and more. But the interesting bit for the geeks in the audience is that, thanks to Cote, our contact information is contained within hcard microformats. Pretty cool, I think.

Q: What’s powering RedMonk 2.0?
A: WordPress. The decision to use it as our underlying content management system was actually sort of an afterthought. But given our own reliance on the product for our blogs and Alex‘s deep experience with it, it became a no brainer. Thus far, we’ve had little cause to regret that call. While it made editing a bit complicated at times, as it lacks versioning, our pages are not likely to be changing enough for that to matter.

More to the point, the pluses to using WordPress easily outweigh the negatives, for our needs. The plugin story alone was a huge selling point; Biggest Community Wins, and all that. It’s also surprisingly functional; the ability to edit pages with a single click, as an example, has been a godsend during the content creation process. In short, WordPress seems to have been a good choice for us as a CMS. We may not be pushing it as hard as the folks from 71Miles, but who knows what RedMonk 3.0 will bring.

Q: What’s not yet complete? Where are there holes?
A: I’m sure we’ll find a great many issues over the coming days, be they typos or links we forgot or things that can’t be anticipated at the moment. But after being so long in development, I thought it would be better just to get this out there even in an incomplete form and let visitors help identify problems.

We’re likely to play with some of the pictures, the actual site copy is likely to evolve, and we’ll probably be playing with the layout on a couple of the pages. We’re also missing landing pages for the Privacy Policy and Credits links in the footer.

But at worst this is more representative of what we are today than was the old site, so it’s worth kicking it out the door.

Q: Any changes you feel will make it easier to work with RedMonk?
A: Well, apart from hopefully giving everyone a clearer picture of who we are and what we do, we’ve added a link to our Simple Subscription Service offer to the site. That’s our Saturn-like $5K deal available to smaller firms with the basic hours/press/networking/etc components to it. So if you’re interested in working with RedMonk now, rather than wasting emails requesting a proposal, you can simply download that, determine whether or not it fits your needs, and request an invoice. Should streamline things significantly.

Q: What about the front and center placement of clients?
A: This is something we’ve wanted to address for a long time. While we hopefully convey in person to our clients that we appreciate our business, our website was lamentably short on credit in that direction. I actually wrote it up back in November, saying:

From those that have been with us almost from day one (almost four years ago now, wow) like IBM and Sun, to our latest recruits such as IONA, MuleSource, MySQL, and SpiceWorks, we’re proud to work with each and every one of them. But while we convey, I think, our pleasure at that aspect of our relationship, I do not think we do a good enough job recognizing that it’s ultimately their support – their patronage if you prefer that description of the model – that allows us to publish the research that we do and otherwise give back to communities wherever we can. Research which we hope benefits a much wider community of than just our customers.

By putting our clients squarely in the center of the site and giving them tiered billing on their own page, we hope that in some small way their willingness to work with us – thus helping to underwrite our efforts to bring all of you free research and analysis – is recognized.

Q: What about the tiering of the clients? Is that new?
A: In part, although we’ve informally used these labels on blogs for some time. Again, this is something that’s been in the works for a while, but we more or less lifted the model wholesale from museums. That sounds strange to most of you, I’m sure, but there are actually some interesting parallels between that business and ours. Both seek to educate and inform, both depend on corporations for sustaining revenue, and – as of now – both recognize differing levels of contributions. We’re grateful for every last client we have, and want to be sure to recognize them for the contributions they make to the bottom line.

Q: I noticed there’s an FAQ on the site?
A: Well, I got outvoted on most of the site features, but I did manage to get my Q&A in there. If any of you have questions that we missed, incidentally, let us know – happy to throw them in there with answers.

Q: Anything else to add?
A: Just that I hope everyone enjoys the new site. It’s been a long time coming, we know, but hopefully is a substantial improvement over what went before. Any problems/questions/suggestions and so on, you know where to find us. Oh, and those of you attending the Tech Meetup tomorrow night, be sure to thank Alex for us – he’s done a lot of work on this.