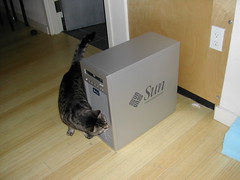 Az Checking Out the New Workstation

When last we chatted about my experience with the Sun Startup Essentials program, I’d just received an order confirmation for my Ultra 20 Opteron workstation. That was January 23rd.

A week later, on January 30th, I received notice that my box had shipped. Two days after that, i.e. yesterday, I got a knock on the door. New workstation, here. Cool.

After Az gave it her stamp of approval (see picture), I got to putting the box together. Installing the additional RAM I’d ordered could not have been easier; the Sun folks actually included the instructions on the inside of the machine cover. One note to future Ultra 20 customers: if you try to use a standard VGA cable on a workstation that’s equipped with a video card with a digital out, it’s not going to work. Just trust me on this, and find yourself a DVI patch cable instead.

Unfortunately, the box was a bit angry when awoken from its slumber; after kicking out errors about an out of sync boot partition, it dumped me into the primitive (and awful, from a Linux user’s perspective) default Solaris shell (please please please fix that, guys). Issuing a reboot on the command line brought the machine down and back up, although for some reason the DHCP acquisition takes eons, and via GRUB I was able to boot into the Solaris failsafe which repaired a slew of errors caused by I’m not sure what.

Thanks to that safe mode remediation, I was able to boot into the default Solaris instance following a very basic machine configuration process. Oddly, the configuration didn’t include basic things like the creation of the hostname or non-root users. But eventually, I booted into an instance of the Java Desktop System (which I prefer over the I-thought-deprecated CDE). Even as root, however, I can’t find a GUI to create a new user so I tried the command line bit that worked on Solaris the last time I configured a box with S10: useradd -u 1010 -g root[1] -d /export/home/sog -s /bin/bash -c “stephen ogrady” sog. No joy, didn’t recognize the group. Look at /etc/group, tried it with root[0], still no joy. And because the default shell doesn’t have previous command access, I’d have to type it out all over again. Not interested, particularly given that the box is ultimately destined to be a Windows box.

Soon as I can wrangle an evaluation copy of Vista from the folks at Microsoft or Wagged, I’ll probably wipe the box, drop Windows on it and run Solaris on top using VMWare when I need it. No, for those of you that might be concerned, I’m not switching to Windows. I merely need a Windows box to test Windows related software. Right now, the box used for that is my old 10 year old, PII 400 Mhz Dell Dimension running Windows 2000. Not ideal, considering that it’s panting just running iTunes 7.

But anyhow, to sum up, Sun gets an A for ship speed and execution (two days despite my selection of the cheapest Express Saver option), a B- for packaging and delivery (everything promised was included, but the documentation apart from that inside the machine is subpar), and a C- for the out-of-the-box experience with Solaris 10 (giving it the benefit of the doubt and assuming that my initial problem was an isolated one). While I can’t give the machine itself a grade yet because I haven’t put it through its paces yet, it does look cool.

Startup Essentials, in other words, is effective for getting the hardware into my hands, but not as persuasive when it comes to getting me to use Solaris 10.

Disclaimer: Sun is a RedMonk client; this machine was purchased in regular fashion with only the Startup Essentials discount applying.