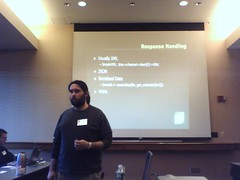 Some 3,130 miles away as the crow drives, the Computer History Museum in Mountain View weeps for its missing conference, as Mashup Camp strays from its home territory for the first time in its brief history. It’s easy to be jealous, after all: the bandwidth at the [email protected] is plentiful, the rooms are more centralized, and Cambridge is just a short two miles from one of my favorite places on earth.

You might read all of that as a validation of the decision to hold the third iteration of David Berlind and Doug Gold’s Mashup Camp on the opposite coast. It is. While I was privately somewhat curious to see what impact the shift would have, thus far it’s been nothing but positive.

Sure, it’s a shame that we miss walk in traffic from the likes of DeWitt, but I’m very pleasantly surprised not just at the number of folks that have decided to attend but the quality. And as much as I like seeing familiar faces at conferences, some turnover of the core audience is critical. It’s not every day, after all, that you get to meet an Alan Taylor in person for the first time (let alone have him attend your session, but more on that in a moment). The only people that I haven’t seen yet that I’d hoped would make it are Erik and Miguel.

Mashup Camp is built around a simple – and accurate, IMO – assumption that the biggest value in any given conference is the people that attend. Rather than limit the interactions with said people to borrowed time in hurried hallway conversations, the unconference structure actively embraces that value, turning the conference into a series of ad-hoc interactions. Very high value interactions, in my experience, whether you’re talking PHP caching techniques with John Herren (pictured) or open source Second Life with Isabel Hilborn.

You might even have the chance to meet the author(s) of some of your favorite web applications. I was honored to have met, as an example, Adrian Holovaty at the first Mashup Camp. I likewise was thrilled to be introduced (by Laura) to Anthony Volodkin – the man behind The Hype Machine (mentioned previously here) – this afternoon. Hope to have the chance to chat with Anthony more extensively tomorrow, but I felt compelled to hand him my nickel (the Mashup Camp equivalent of a vote) because I’ve been using his application so extensively for at least three months.

The highlight of the show thus far was the session that StrikeIron’s Dave Nielsen and I “led” this morning on the commercialization and licensing of mashups and related technologies. I qualify the led remark not because of any failure on mine or Dave’s part, but rather because the audience bascially took the discussion in the directions that they preferred. What started as a four or five person chat ended up being a standing room only debate in a 50 person room, with lots of discussion and debate over the issues facing both mashup developers and service providers. What falls out of this session remains to be seen, but I’ll be following up shortly with the ProgrammableWeb’s John Musser and a couple of other parties to see where we might center a discussion and list around best practices, potential business models, and the like as Kaliya’s husband Brian suggested. My old colleague Gordon Haff was dutifully taking notes as well, so hopefully those of you unable to be here can get a decent sense of what transpired once those get online. I’ll also have more detail for you in a follow up post.

Until then, I’ll have more from everyone’s favorite mashup related conference tomorrow.