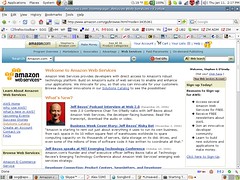 Goes to Jeff Barr and the intrepid Amazon Web Services crew. It may seem slightly odd to be doling out awards for 2006 on January 11th 2007, but I wanted to let the crush of other retrospective and award type posts subside, and contemplate the alternatives for another few days. Plus, there was vacation. Fortunately for the AWS crew, the further consideration has done little to alter my opinion that the most significant new technology I saw in 2006 was Amazon’s burgeoning web services – or Hardware-as-a-Service, as I prefer to think of it – platform. So they’re the winners of the inaugural tecosystems Award for Technical Innovation – the only award I’ll issue for the year.

From what I gather, the financial analysts aren’t too keen on the scope of Amazon’s Web Services investments. In a piece written by News.com’s Martin LaMonica, Jeff Bezos seems to be asking for patience – something Wall Street is not known for; pointing out that it took between 3 to 7 years for other new business areas to show “meaningful financial results.” And notable search guru and pundit John Battelle isn’t expecting things to get easier in ’07, saying:

Amazon will continue to push beyond ecommerce into web services, the market will punish it for doing so, and by the end of the year Bezos will be forced to defend his investments as his stock takes a hit for those services’ failing to find traction. It’s not that I don’t believe in Jeff’s vision, it’s the track record with things like Alexa and the very real sense I have that the market for what Jeff’s selling is not yet fully baked.

For my part, I have no idea what the market will or will not do, and I actively dislike the business of prediction. I’m very Drucker in that sense. But I am confident that AWS is a.) addressing a sizable and growing market and b.) a big deal.

My reasoning for that assertion is both simple and long held. Way back in December of ’05, I wrote a piece on the challenges of scaling for smaller businesses, saying in part:

One interesting question that I’m beginning to ask from all of this: is it even possible for smaller players to scale competitively? As good as the del.icio.us, FeedLounge, et al guys are codewise – and many of them are very, very good – there’s the non-coding aspects of scalability to consider. Networking, hardware, etc require capital investments that can be onerous when bootstrapping, and it’s a simple fact of life that the smaller guys don’t benefit from the economies of scale that say a Google or a Yahoo will. They buy hardware piecemeal, and get run-of-the-mill bandwidth deals, all of which adds up to high entry costs.

But might there be an opportunity there? Might there be an opportunity to aggregate lots of these Web 2.0 (for lack of a better term) services in one place, and offer them an affordable, scalable infrastructure? Maybe. There are lots and lots of hosts out there, but are there any that provide specific expertise in scalability? None that I’m aware of.

Amazon answered the question simply: yes. The opportunity was and is to leverage the economies of scale enjoyed by an Amazon size player – primarily in hardware, but also in bandwidth, systems management, and so on – on behalf of a sizable and growing volume of customers in true Long Tail fashion. To aggregate, in other words, lots of these Web 2.0 (and others) in one place – Amazon’s existing infrastructure. It’s margin rather than volume, at least for the bulk of customers, but there’s also an inherent first mover advantage here. Or do you think that once customers have gone through the exercise of uploading gigabytes of data to an offsite provider they’re going to switch? (I’ll get into this later, but the lower upload speed for many home broadband providers is a definite inhibitor for consumer growth).

Software-as-a-Service is – somewhat justifiably – all the rage these days, with even mainstream customers increasingly comfortable using online services to make up for the shortcomings of rich client systems. That they have succeeded to the degree that they have is proof positive that convenience – low barriers to entry, in RedMonk-speak – wins more often than it won’t. Software-as-a-Service applications, after all, have serious limitations when compared to their client side brethren, but they’re just so easy to start using.

So why should we doubt that the hardware equivalent of SaaS has similar potential? If the latency between “I need storage” or “I need a server” is a credit card and downloading and installing something like JungleDisk, well, how could that not be of interest? Even on a consumer level that has potential; I’m trying to persuade a researcher friend that rather than buy an external hard drive for some sizable GIS data that he has accumulated, he should just put it in S3. And for the start-ups discussed above? This could – and already is, in some cases – save them tens of thousands of dollars in hardware and hosting expenses. Will it pay off for Amazon? I don’t have even approximate figures for what it takes them to service an individual account, so I have no way of knowing, but I can say that I’m likely to go from paying them 17 cents a month in ’06 to 17 bucks a month or more in ’07 for business/personal use.

And frankly, I think that speaks to the fact that we’ve only seen the very tip of the iceberg in terms of the addressable market. As with any platform, I expect to be continually and repeatedly surprised by what uses customers find for AWS offerings. As Mark Andreessen said of VMWare at VMWorld, I expect AWS to be the kind of product that “the more you use it, the more you figure out new ways to use it.” Cheap download mirroring? Cost-effective on-demand clustering? Automated consumer backup? Maybe they’ll be the new departmental servers. I spoke with a vendor just this morning who’s planning some interesting S3 based offerings. Who knows how the services will be used. Not I, and almost certainly not you either. But I think it’s safe to assume they will be used, and used with increasing frequency.

It’s possible, of course, that the notion of hardware-as-a-service could be ahead of its time much in the way that it’s software cousin was; certainly that’s what Battelle seems to think. But I’m less concerned about that. SaaS was held back by a unique combination of factors, and had to win over a much more skeptical audience. HaaS, I think, might be like the younger brother that benefits from “broken in” parents. Even should that not prove to be the case, I think Bezos and co will be patient enough to give the business a strong chance to succeed (and the two billion sunk already probably doesn’t hurt there either).

Despite this award, AWS is far from perfect. I’ve criticized them in the past for the complexity of their toolset, and many if not most of those criticisms remain valid (although they do finally have an Ubuntu image). It’s also worth questioning, I think, whether or not startups should be running on Amazon quality gear. [1] Likewise, I don’t expect Amazon to be the sole occupant of this market indefinitely; one of eBay, Google, IBM, Microsoft/MSN, Yahoo could very well introduce a competitive product offering in ’07, and Sun already has a more limited grid type offering available. Actually, I’d argue that more strongly: I think one or more of those players has to get into this market, or risk losing developers to competitors’ technologies.

But for the vision and leadership that Amazon has shown in this area, addressing a market need I’ve been writing about for years, they’ve earned my inaugural award – for whatever it’s worth.[2]

Disclaimer: Amazon is not a RedMonk client, although their subsidiary A9 is. Of the other mentioned vendors, eBay, Google, and Yahoo are not clients, while IBM and Microsoft are.

[1] Amazon, like many other very large network vendors, runs on cheap whitebox hardware that has a notable tendency to break. For Amazon, that’s not an issue. For a small business, it could mean some disruption.
[2] How about a round for any AWS folks attending next week’s Mashup Camp, on RedMonk?