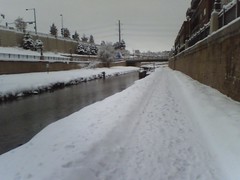 A couple of you have asked what I’ve been doing, so herewith is an account of my spectacularly mundane vacation. On my winter vacation I…

Not exactly two weeks in paradise, I know. But that’s the price one pays for spending substantial portions of four months on the road: there’s a lot of catching up to do. So what’s the plan for my last weekend of freedom?

Fly to Boston, naturally. The good news is a.) that it’s Boston, and b.) that this flight earns me (yet) another free flight on JetBlue. Will be there for a friend’s bachelor’s party this weekend, which fortunately should be fairly mellow (for me, anyway), then it’s back to the grind next Monday.

Regrets for this vacation are twofold. First, I did not disconnect from work as much as I would have liked to. I’ve worked for at least an hour pretty much every day that I’ve been out. This was partially unavoidable because there were several things still up in the air when I left, but I also could have done a better job of not checking my email. Looks like I’m going to need a no email policy similar to my no fly policy. At least I still don’t have a crackberry.

Second, I didn’t do a lot of writing. I’ve got a significant backlog of non-work stuff that I’d hoped to tackle but haven’t. Oh well, maybe on the plane tonight.

So that’s my vacation. Thrilling? Maybe not. But reasonably productive. I’ll have more fun next vacation. I promise.