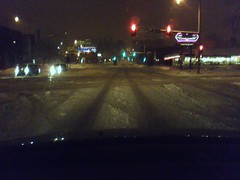 Colfax During the Double Blizzard

Given that the double blizzard is upon us, driving in the snow is going to be an unfortunate reality for pretty much everyone in the Denver metro area for the foreseeable future. As a result, I thought I’d share the most important lessons gleaned from my winter driving education in New England, which included three Maine blizzards.

If you have rear wheel drive, you may as well stop reading now: you’re screwed. All the advice and fancy traction control systems in the world can’t make up for the basic physics. So stay home. If you absolutely must go out, the best thing you can do is put sandbags or something similarly heavy (plates from your weight set work nicely, in my experience) in your trunk to try and give the drive wheels better traction. But I’d still recommend staying home.

You’d think this goes would be simple common sense, but in every storm there’s some idiot that’s convinced that because his Hummer has four wheel drive he’s above such behavior. That idiot usually ends up in a ditch somewhere, so take it from me: drive slow. If I can manage this – and I once made it from Boston to Maine going no faster than 20 MPH – you can too.

Brakes are your enemy when there’s snow on the ground and should be used as a last resort only. Application of the brakes is likely to cost you what little traction you have and may lock your wheels, so using them is almost always a risk. Use the transmission to throttle your speed, even if you’re unlucky enough to have an automatic. One additional note: if you have ABS, do NOT pump your brakes – the system does that for you. I’m surprised at how many people don’t know that.

There are dozens of bad things that can happen when you stop – you could skid, you could be hit by someone who can’t stop, you can lose traction and get stuck, and so on – so do it as little as possible.

Many experienced snow drivers think they’re in good shape because they’ve been through it before. Regrettably, that’s only part of the equation. You need to be just as concerned about the other folks on the road as you are about your own car – particularly when it comes to intersections, exits and other areas where bad things can happen. As n example, it’s often useful to wait a three or four count before proceeding into an intersection during a snowstorm, so as to avoid being hit by the driver who couldn’t stop to make the light and simply barrels through.

Avoid it. Snow’s not simple to drive in, but is manageable. Ice is an entirely different matter, and unlike snow four wheel drive means virtually nothing on ice. The same rules apply to driving on ice, but even if you follow them you can easily lose contol.

Rock back and forth and see if you can free yourself. Sometimes you can – like when I got stuck in front of the Irish Hound this very evening – and sometimes you can’t, but blindly applying throttle is likely to only dig you in deeper. And could burn out your clutch, if you drive a stick. If you’re at home, see if you turn up sand, salt, kitty litter, or boards – anything that will a.) give you better traction, b.) melt some of the snow you’re stuck in, or c.) both.

Depends on conditions, but you’re probably better off not using them. When there’s decent snow coming down, your high beams are likely to reflect off of the blowing snow and blind you rather than give you better visibility. It’s similar, in that respect, to fog.

That’s all I can think of off the top of my head; feel free to share your tips if you’re so inclined. And to everyone in Denver, be safe out there. The roads weren’t good to begin with, and are getting worse by the minute.