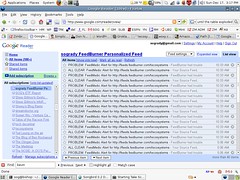 Houston, We Have a Problem w/ Our Feed

I’ve been noticing some weird feed related issues for some time now, and after looking into the problem this morning I still can’t say what the problem is. Or, more importantly, where it is. Is it Feedburner? Or WordPress? A WordPress plugin? Apache? No idea.

There are a variety of symptoms to my feed issues, which may or may not be related.

At this point, I’m more or less out of ideas. I’ve tried deactivating both my Atom 1.0 and Bad behavior plugins in WordPress in the event that they were at the root of Feedburner’s issues with my feed, but thus far they’ve done nothing to remedy the situation. Suggestions are, as always, appreciated, and otherwise I’ll probably try and revisit the situation next week when I have more time. Also, if you observe strange feed behaviors please do let me know. I almost certainly can’t fix them, but it’s more evidence for debugging.