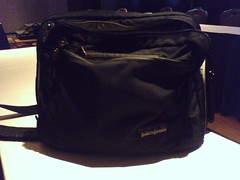 Lots of people are getting bags, it would seem. While they’ve each made different choices – doubtless appropriate ones for their needs – I feel compelled to recommend the bag that I’ve relied on for years. If you’ve seen me at a conference any time in the past couple of years, you’ve seen it. Probably slung over a shoulder, or forlornly cast down at the feet of some rickety folding table. What you may have not realized, given its rather pedestrian looks, is that this is unquestionably the finest piece of luggage I’ve ever owned. Even better than my Dana packs.

As evidence, I’ll offer up only the fact that it’s survived better than 4 years of near daily abuse. It’s not just the travel, which is frequent, but the fact that as my friends and family can attest I rarely go anywhere without it. Headed to meet Alex for lunch? Bag’s there. Working over at Common Grounds? Ditto. It even puts in regular appearances at My Brother’s Bar on 15th and Platte. It’s not quite what I put rental cars through, but if you’re reborn as a bag you don’t want any part of me.

The features aren’t bad: the original shoulder strap was a bit too short so I cannibalized my old bag for that, but everything else is perfect. It’s got the usual laptop sleeve, a convenient little exterior pocket for iPod and earphones, and enough space in the main compartment to throw in a change of clothes (a facility I used regularly when crashing w/ friends in Boston). Provided that you don’t overstuff it, it fits very comfortably under an airline seat. It also converts into a backpack if that’s your thing (it’s not my thing). And though you may not think it’s important, the first time you have to trudge all the way out to Lot WW in the pouring rain you’ll appreciate the fact that all zippers and seams are sealed and (highly) water resistant.

In short, it’s the perfect briefcase. I liked it so much I picked one up for my Dad last Christmas, and the early returns on that gift have been good. So by all means, consider other bags or briefcases, but I can’t really see how you’re going do better. It’s that good. Throw in the fact that Patagonia is a very environmentally conscious firm that donates 1% of their profits to worthy green causes, and it’s a win/win. Long live the Patagonia One Bag.

Surprise – I just said a bunch of nice things. As Mike noted yesterday, my reputation’s been built mainly on criticizing products so I wouldn’t I want to let anyone down. Let me say then that whoever gave the Patagonia designers the idea that a doctor’s style bag opening would be “more convenient” should look for a new line of work. You notice how doctors haven’t carried that type of bag since the late 19th century? Could be there’s a reason for that. Never having owned one myself, I can’t say for certain but I can say that it’s modern cousin, the Patagonia Overhead Shed, is very difficult to pack bag. Unlike the doctors kits that were apparently the design inspiration, my Overhead Shed must be reopened for each piece of luggage being inserted because the flaps do not remain extended once opened. And if you’re trying to pack formal attire still in its dry-cleaning plastic, I wish you the best of luck. Should you discover a technique that works, please do let me know.

Other than that, it’s a good bag: light weight, balanced wheels, enough ground clearance that your stuff’s not getting soaked even when dragged through a light covering of snow, and a handy top pocket for the stuff that can’t go through the metal detector. But the doctor’s bag thing is just a killer.

Oh, and before I forget, for those of you getting sticker shock looking at the pricing on these things, I have two words for you: Freeport. Outlet. Enough said.

There are no disclaimers to make here because I have no affiliation with Patagonia other than the Patagonia trout sticker on my back windshield and the fact that about 75% of my non-work attire comes from there. But just in case someone from the company runs across this post, if you’re looking for an ambassador (their version of a tester) for some of your business traveller gear, I am definitely your guy. Just click here. One more thing for the hypothetical blog-aware Patagonia employee: make flip-flops. Almost all of your customers wear them – it’s silly not to.