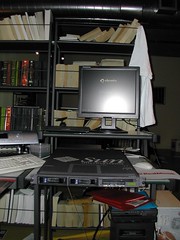 Ubuntu Being Installed on the V20Z

As discussed yesterday, I hopped down to Englewood today to retrieve our V20z from the datacenter where it was colocated. Once I had it back here at RedMonk headquarters, I popped in an Ubuntu AMD64 CD and I was off to the races. Although you probably can’t make it out due to the glare, Ubuntu gives you the option of preinstalling a LAMP server from scratch – which just so happens to be exactly what I need. A couple of minutes and a restart later, and hicks was born [1]. My only complaint about the install is the lack of ssh as a default package, particularly on a server installation.

I’ve also reached a final decision on the hosting front, and that choice is Johncompanies. It was a tough decision to pick between them and the other finalist, Austin Web Development, but in the end I had to go with the provider that got more recommendations here on the site. Should I have problems with Johncompanies – which I don’t anticipate – my next stop will be Chris in Austin.

So the next steps are these:

What does this mean to you? With any luck, it means within about a week you won’t be receiving any of those immense frustrating errors that indicate that we’ve lost connectivity to our MySQL databases. Again.

Will keep you all posted on our progress.

[1] If anyone gets that reference, I’ll be very impressed. The only hint I’ll give you is that it has nothing to do with the slang term for rural residents.