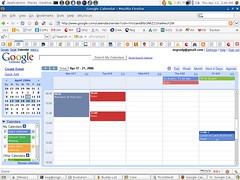 Well now, this should be interesting. As Luis and hordes of other folks have noticed, Google’s (finally) released its long awaited calendar application – check it out here. I’ve written about the potential impact of a Google Calendar offering before, and have actually been anticipating such a release for a couple of years – along with just about everyone else in our industry.

The first question to be answered when I first heard of the release was simple: was Google Calendar more Gmail, or Google Reader? The former was groundbreaking in a couple of respects – storage size, use of Ajax, threaded conversation style, etc – while the latter was, for me anyway, unusable. As far as I can tell in my usage so far, it’s more Gmail than Reader, though not nearly as innovative. That, in part, is an indication of just how far Ajax has reset customer expectations; it’s transitioned from a differentiator to table stakes.

But what about the features? As we often tell folks that are briefing us, RedMonk is not a feature/function firm; we’re not in the business of doing product scorecards or comparisons. But from a RedMonk perspective, Google Calendar has a couple advantages over our current calendaring system, Exchange.

So functionally, I’m in agreement with most of the reviews that I’ve seen so far today: Google Calendar is an excellent first entry. It’s not perfect UI-wise, the Verizon SMS thing is irritating, and I’ve experienced fairly regular latency, but overall it’s a solid offering that should be usable by anyone looking for basic calendaring – which, in my view, is most calendar users.

But forget those hypothetical regular users, my interest in Google Calendar is more than academic. As I’ve discussed ad nauseam before, our messaging situation is quite dire – and I’ve been on the lookout for a replacement for a while. And if it was just messaging, I probably would have gone with something like Fastmail or Tuffmail as recommended by Friends of RedMonk like Alex or Christopher. With the amount of scheduling we do, however, calendaring is not a nice to have – it’s a must have.

Given that, Gmail/Google Calendar looks like a pretty good option. They have POP/SMTP access, so we could all continue using our clients of choice (Evolution/Outlook/Mail.app/etc), and those of us with the ability to capture iCal files offline (Evolution, in theory, can do this) would even have persistent. The calendar persistence is less important, for me anyway, if the SMS notification works reliably. I’d much rather get occasional text messages than keep opening my laptop.

What’s the catch? Well, as Ian learned recently, you’d apparently have to be a “dipshit” to trust free services with “CRUCIAL” data (apparently your personal emails and such aren’t crucial). While I don’t buy that argument at all, nor do I fully trust services that I’m not paying for. That, more than any other reason, is why I believe Google ultimately will roll out for-pay services: folks like me are more than willing to pay for them, if the price is right.

It’s also worth noting that for-pay services are hardly trouble free; we’ve had significant difficulty with our current Exchange host ASP-One, and our experiences prior to them were horrific. And don’t even get me started about our pre-1and1 web hosting history. The (regrettable) lesson learned from those experiences is simple: do not trust smaller, less well known hosts because even if they’ve got their act together, eventually they’ll get acquired and the transition will screw things up. I’d love to give them the benefit of the doubt, but having your email down for 2 days because of a botched DNS & MX record change is not a whole lot of fun.

At present, then, I’m not sure what Google Calendar means for RedMonk. Functionally they’ve got just about everything we need, but the reliability may not be sufficient. And then there’s our users: Cote’s a huge fan of Gmail. James? Not so much.

Either way, for the next few days, I’ll be transitioning my calendaring there as an experiment – worst case I can export the data from Google Calendar and into Evolution. From that, I should have a better sense of whether or not Google’s ideal for us longer term. Regardless of what it means for us, however, I have some ideas on what it means for Google and some of the other calendar players. More on that tomorrow.