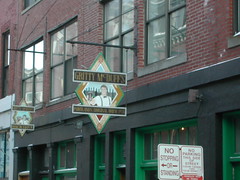 In a guest post on Om Malik’s blog, Jackson West posits that coffee shops are the new office space. The piece resonated with me on two levels. First, I’ve been considering the implications of business model innovation outside the confines of my industry, particularly with respect to the types of venues I might frequent. For an idea of what I’m talking about, see Christopher’s post here or Niall’s here. Second, as someone who works from home, I’ve been devoting some thinking to the limitations of our increasingly remote and isolated working environments (from a non-technological perspective).

Taking the latter point first, I had the good fortune to be able to travel out to Mashup Camp and back with Alex, and it was an excellent reminder that IM and email are no substitute for face to face interactions. It’s the little things that are lost: something as simple as this is not likely to happen during the occasional lunch, for example. Or take the case of another friend of mine that I had lunch with last week; since beginning on a work from home program several months ago, she’d been out of the house for lunch precisely zero times prior to our meeting.

The purpose here isn’t to explore the psychological dimensions of those work habits for good or ill; I’m neither qualified nor interested. What am I curious about is whether or not coffee shops – or similarly wireless equipped bars or restaurants – can fill the void created by remote working scenarios (or just situations where your colleagues aren’t the most interesting people). I have no definitive answer to that question, but I can tell you that in my experience getting out on a semi-regular basis seems to make me more productive. As my colleague says, the Pub is the Place. I’d be interested in any thoughts or experiences that you guys have on the subject.

Assuming that it’s true, however, that one is more productive if they’re occasionally removed from the fixed confines of their cubicle or office, the next question is whether or not there’s a business model to be built around it. My feeling, unsurprisingly, is yes. One of the subjects I plan on floating at the next Denver Tech Meetup (bought a domain for it, incidentally), is whether or not there’s any interest in designating a particular venue as The Place to go for lunch or afternoon work breaks. Not on any set schedule, of course, but a place where you have a greater likelihood of running into other technologists that it might be fun to talk shop with. Who knows, maybe the next iteration of the Denver Tech Meetup website (PHPTiddlyWiki failed on install for me, hence the low tech current page) could play a role there in a, “in case anyone’s interested, I’ll be hitting venue x for lunch on Wed” sort of way (of course, shared calendars would be great here, but I’m trying not to get amped up on that topic any more).

When you think about it, it’s simple. If I have two venue options for lunch: one that I select at random, which might or might not have good food/power/drink/etc options, and one that has all of the above, and where I’d also have at least a chance at running into folks like Alex, Jeff, Bruce, Lara, Larkin, Matt, Matt, or Peter (and maybe in future, Anne 😉 – well, which would you choose?

If said venue were to provide some basic, low cost prerequisites for my work: ample power, wireless (preferably free), at least room to sit and work, and a reasonable selection of sustenance options, I know they’d get a fair share of my business. Would that drive land office business, here in Denver? Probably not. But given the general economic precariousness of many of the smaller, non-chain coffee/bar/restaurant type establishments, I don’t think it could hurt either. Particularly if they got creative economically and offered packages and perks to actively court the business, while creating some customer incentive. Would you rather eat in your office, or at a place like Portland’s Gritty’s?

Besides, it’s not as if this wasn’t how business used to get done.

P.S. If you’re in Denver and looking to grab some food, maybe a beer, and get some work done here are a couple of venues I’ve found:

And in case anyone’s curious, yes I’m working on the Supper Club. Hopefully more on that front soon.