On August 22 VMware and Pivotal announced an agreement for VMware to acquire Pivotal for $2.7B.

Welcome (Back) to the Family

It’s notable that Pivotal was previously part of the VMware portfolio. In 2013 EMC-VMware spun off a collection of technology assets in order to form Pivotal; six years later, Pivotal is returning to the fold.

Honestly, the Dell-EMC-VMware-Pivotal family is one of the most convoluted corporate structures I’ve ever encountered. They have a collective history full of mergers and acquisitions, asset spin-offs, cross-entity majority/minority ownership interests, shareholder activist lawsuits, and atypically complex financial maneuvering to move the various entities between public and private ownership.

If you’re interested in details, this a16z article following the Dell-EMC merger is the most comprehensive starting point I’ve found exploring their historic ownership structure, though at this point it’s a few years and a few major acquisitions out of date. If you’re just trying to keep the high level straight, I offer this approximately correct, highly simplified chart that I sketched out to try to keep basic ownership and public/private status straight. (My heart goes out to the accounting team that has to do all the intracompany billing. I can’t even imagine how convoluted the legal entity setup must be. Godspeed, my beancounters.)

I think one of the questions that makes sense after seeing this history is “why now?”

In 2013, EMC-VMware spun off the Pivotal assets but maintained majority ownership in the newly created company, along with a $105M investment from General Electric. The goal was to enable Pivotal to focus on “non-core” VMware functionality like Platform-as-a-Service (PaaS) and big data capabilities. Pivotal’s initial assets included the Cloud Foundry platform and Spring framework. They also had a professional services play with the Pivotal Labs team and additional projects like RabbitMQ, Greenplum, GemFire, and Cetas.

Pivotal’s big data solutions have largely fallen out of focus in the intervening years, but their PaaS offering and professional services targeting enterprise digital transformation found enough market traction to warrant an IPO. Pivotal went public in March of 2018 and at a high point reached a market cap of $7.4B in June 2018.

So with that history in mind, why does it make sense to bring the Pivotal assets back into the fold six years after they were spun off?

There are a couple points of view:

One factor in the deal was Pivotal’s tanking stock price. The company struggled to deliver market-pleasing results these past 18-months.

This is a chart of the company’s market cap between its IPO and its unaffected date preceding the acquisition announcement: 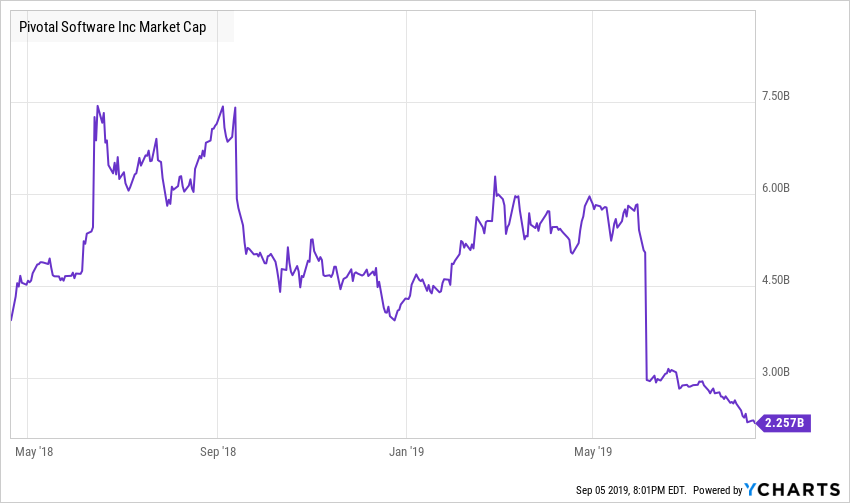 You may notice there are two near vertical lines; those represent steep drops in company value following two of the company’s five earnings releases during this time period. If two out of five of your quarterly earnings announcements as a public company result in $1.5B (Sep-18) and $2.1B (Jun-19) losses in company value, that’s suboptimal to put it mildly. At the time of the acquisition announcement, Pivotal was worth roughly 30% of what they were at their peak in 2018.

Time for another history lesson (this one slightly less convoluted, I promise):

Thus at the time Pivotal was created, it was not at all evident that containers would become the market phenomenon that they did – a phenomenon which was the fastest growing technology RedMonk has ever tracked. Both VMware and Pivotal therefore made decisions about their strategic direction at nearly the exact moment the market began to change around them. The journey that both companies have been on the past six years are a direct consequence of the market disruption of containers.

Containers allow for immutable, agile, scalable infrastructure, and this contributed to an evolution in both development workflows and application design. Container-first architectures required a different method of orchestrating workloads. And that’s where Kubernetes comes into play. In the past few years Kubernetes has emerged from a pack of contenders to establish itself as the de facto solution to container orchestration and has become a force unto its own in the market.

In 2013, VMware had a business that was squarely focused on the virtual machine (VM) as the abstraction and management layer. As containers emerged as a competitor to the VM, VMware had to grapple with how it approached value creation in the stack. When VMs were the abstraction layer of choice, less attention needed to be paid to the interplay between the VM and the software on top of it. At the time, application platforms were non-core to the company’s efforts.

In 2013, Pivotal was focused on helping customers build development platforms using Cloud Foundry. As containers emerged as a developer-led phenomenon, Pivotal had their own grappling to do around the interplay between containers and PaaS; were they competitive or complementary forces? The Cloud Foundry Foundation recently announced Project Eirini to incorporate Kubernetes into the runtime, allowing us to conclude the community is settling on the latter. But the path to articulating this journey has been difficult, as evidenced by the (frivolous at best and bad faith at worst) shareholder lawsuit against Pivotal for their alleged failure to disclose its lack of compatibility with “the industry-standard Kubernetes platform.”

But only taking origins into account can make this history reductive. Though VMware and Pivotal come from a pre-container competitive landscape, both companies saw and responded to the emergence of containers and accordingly adapted their market strategies to account for the rise of Kubernetes.

And this helps us answer “why” and “why now”:

Together, both companies have an improved ability to attack the market and become more direct competitors not only to Kubernetes platform offerings (like OpenShift from IBM/Red Hat) but the major cloud providers who are attempting to attack the same market via offerings such as Anthos or Fargate.

As with all acquisitions, however, what looks good on paper is less important than on post-transaction execution – particularly with VMware already in the process of integrating multiple adjacent pieces. It will be important, therefore, to watch for signs of how smoothly the one time spinoff is reintegrated into the parent.