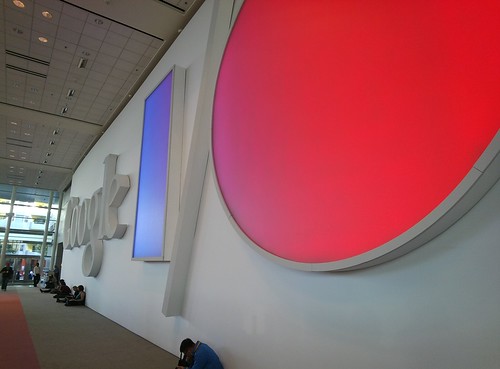 “Google announced so many things yesterday that it makes my head spin.” – Fred Wilson

The challenge with a conference like Google I/O, where the announcements arrive one after another, is to see both forest and trees. Analysis of individual announcements – such as Google’s new Pandora/Rdio/Spotify competitor All Access, or the granular pricing for its compute infrastructure – is relatively straightforward. What’s more important, however, is perceiving the larger pattern.

The most obvious feature of Google I/O is the emphasis on the developer. As they have in years past, Google demonstrated their commitment to developers financially, handing out over a thousand dollars of free hardware in the Chromebook Pixel. But the content itself reflected this prioritization. Rather than easing into the keynote with something accessible to non-programmers such as All Access, Google devoted fully the first forty minutes to API announcements. And then followed that up with the release of a new Android development tool that is already eliciting favorable comparisons to Apple’s Xcode. And so on. I/O is, to its credit, remaining true to its roots – it is a developer show first, and everything else second.

So Google gets the importance of developers: this does not exactly qualify as news.

Perhaps less obvious, however, was the strategy implied by the announcements. Many were surprised – in spite of the hints ahead of the show – that Google did not unveil a new piece of hardware, or even an updated version of their Android operating system. There was even disappointment in some quarters; a few of the developers seated behind me were grumbling that there wasn’t even an update to the Nexus 7, as had been speculated ahead of the show. Nor should the disappointment have been a surprise: Apple has created the expectation that developer events must also serve as launch platforms for hardware and software. Developers have been conditioned to expect new hardware, new operating systems and more.

By not even announcing either a new device – unless you count the already available Samsung Galaxy device running stock Android that will be sold in late June – or a new version of the operating system, Google is telegraphing their belief that the basis of competition lies elsewhere.

Some might argue that this is less of a strategic statement than a matter of timing; that Google simply didn’t have either a new operating system or device to present. And there is truth in that. With its Nexus 4 device less than six months old, an X phone announcement was always unlikely. The past four releases of Android, meanwhile, have arrived in either July or November/December. It is hard to make the argument, however, that Google could not have at least previewed upcoming technologies. Technology companies reveal products far ahead of their production readiness all the time.

The statement made by Google yesterday, instead, is that the war for mobile will not be won with devices or operating systems. It will be won instead with services.

Last November, Patrick Gibson argued that Google was getting better at design faster than Apple was getting better at services. While Google’s design credibility can be debated, Apple’s history in services cannot. While its systemic issues have been damaging enough to require more than one apology from the company, Apple has – in spite of its resources – seemingly made little progress in the services area. Those who have worked with the company point to cultural issues as one factor – the company’s secrecy can make it difficult for infrastructure teams to work effectively together – but whatever the reason, Apple has been less successful in services than it has in virtually any other area of its business. At a time when services are becoming more important to users.

And that’s without getting into any of the Google Cloud Platform announcements. Apple has competitive offerings – superior offerings, in some cases – to some of the above. But it’s missing many, and in others, Maps most notably, Apple lags considerably behind. Hence Google’s approach, in which it attempts to apply its strengths in delivering services at scale to Apple’s perceived weakness – delivering services at scale.

Whether Google’s strategy here is successful depends in part on timing and the commoditization of the user interface. Essentially Google needs Android to be, at a minimum, a “good enough” user interface to be considered a reasonable alternative for a large enough subset of the addressable market to make Google’s advantages in services relevant. Two or three years ago, this was not the case. Today, it might be. Apple, meanwhile, needs to increase the distance between Android and iOS enough to give itself time to either build or acquire a competency in services.

Either way, two things are clear; the developers, as ever, are firmly in control, and WWDC in June should be very interesting.