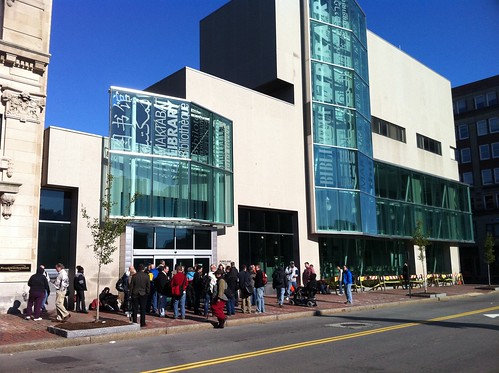 As far as I’m aware, the Monktoberfest is the only conference that began its life as a punchline. It became more than that because the attendees wanted it to. It was, to borrow a metaphor from the ITSM guys, Field of Dreams in reverse: you wanted it, so we built it.

Here’s how that happened. February 17th, I tossed out a throwaway line on Twitter, kidding. None of the people bombarding me with @ replies, email, IMs, and voicemail, however, thought it was funny. They were very serious, and very persistent.

So we looked into it. First, asking the Lion’s Pride if we could shut them down for an evening. Next, scouting potential conference locations. Then, speakers. Rinse, lather, repeat.

Seven months and nineteen days later, we were all together at ten in the morning in the downtown Portland Public Library holding new smelling t-shirts.

The volume of reactions to the day have been, frankly, humbling. All the more so because credit for the event rightfully belongs to everyone who pushed us to make it happen, and everyone who took a few days out their schedule to be with us.

Here’s how we did that.

We began with the beer, of course, as the name implies. We’re fortunate to have one of the world’s best and highest rated beer venues here. But that meant that would be attendees would have to come to Portland, ME rather than us bringing the event to them in Boston, New York or San Francisco, as is more common. We decided that was a plus, because we wanted this show to be populated by people who actively wanted to be there, rather than those who might attend out of convenience because the venue’s a ten minute drive from San Jose or similar. And if people got the opportunity to see that Maine generally and Portland specifically are a beautiful place to live and a great place to work, so much the better.

"Kitteh vs. Chikin: What Data Can Tell Us About Who We Are and Who We Want to Be." (Monktoberfest 2011)
View more presentations from Matt LeMay

But you need more than beer to hold a conference. You need content. Believing that some of the best content at any conference is the hallway track, we optimized for that. Start time was 10 AM, so that attendees could enjoy themselves at our welcome event the night before, and self-organize for breakfast the next day if they chose. Talks, meanwhile, were single track and loosely scheduled. This meant that we were all having the same conversation when there were talks, and that there was time in between to discuss and dissect.

For our theme we chose social. Not as in something narrow and prescriptive like social media, but social as a broader trend. Because if it’s true that software is eating the world, it’s equally true that most software is social these days. GitHub’s changed the way we develop software, permanently. Untappd – the official social network of the Monktoberfest, and a speaker at the event – has changed the way people drink, and where they drink from. And they have the data to prove it.

And so on. We didn’t want to create an Everybody conference, or a Specific Agenda conference: the Monktoberfest was built from day one as a Welcome to Our Home Conference. We hope everyone felt that way.

Instead of giving away the usual conference bag, we gave our attendees glasses. The t-shirts were a bit traditional, admittedly, but they went over well for all of that.

Thought went into the website as well. By regular conference organizer standards, our simple WordPress instance was primitive. But we tried to actively think about what attendees would want to know, rather than what we wanted to broadcast to them. Hence a travel page that linked to NY Times reviews of Portland and an FAQ that told you when to arrive and depart and who should attend.

We go to a great many conferences, and the food is more often than not poor. Which isn’t a big deal for me, as I’m not a food person, but if you can improve it for those that are, why wouldn’t you? Why not try and turn what is usually an afterthought into a feature? So lobster rolls and clam chowder it was for lunch, with vegetarian wraps for those that who aren’t meat eaters. Granted this was easier for us to do in Maine from a costs perspective, but that’s just one more reason for us to leverage this non-traditional destination.

What we offered our sponsors was simple: exposure and, at higher spend levels, a few free tickets. We weren’t allowing product talks – that was, in fact, the only rule we had for our speakers – because we didn’t believe they were a fit for this audience. There are other shows to pitch your product; that wasn’t why we were here. That Red Hat’s OpenShift project, deCarta, Basho, Splunk, Zendesk and Crowd Favorite shared that vision with us, and didn’t insist on being given their fifteen minutes of fame at our show is to their credit, in our opinion. They were the reason we were able to do everything we were able to do.

The size of the Monktoberfest was as much about embracing constraints as planning. We worked backwards from the capacity of our venue, and the result was the type of intimate conference that we’d hoped for, or so the attendees told us. Some things just work better at a small scale; this is especially true of things that involve people. Discussions ran well over their allotted time because people were asking so many questions, and the questions were all good. This is the type of problem that, from the perspective of a conference organizer, you want to have.

We’ve had a few people tell us they met more people at this conference than any other that they’ve attended. Even better, the staff at the various venues reported that they enjoyed themselves nearly as much as we did, and that everyone was polite both to them and to the other attendees. This is a testament to the quality of the people we drew.

The credit for this event belongs everywhere else. What we did best was find good people, then get out of their way.

Logistically, Anna Melbin and Stu Brydon did a wonderful job before and at the show keeping things running smoothly; my life would have been miserable without them. My wife Kate has likewise been doing an immense amount of coordination work in the run up to the event while juggling her various other professional obligations, and things like the glasses were her idea. Marcia Chappell, who runs RedMonk operations, has been doing yeoman’s work for the past few weeks, coordinating with everything from the bus company to the venue. Rori at Novare Res took great care of us Wednesday night, and Lurie Sprague-Palino and her team at Seacoast catering did an excellent job, as always, with our Maine-themed lunch.

And as for Leigh and Ryan Travers and their team at the Lion’s Pride, as Joe Brockmeier put it, “I’d write more about it, but I think it might be cruel to those who didn’t attend to go into detail.” All that you need to know about their effort level was that they drove nine and a half hours to procure one of the beers for our tasting. Ryan and Leigh are among the best in the world at what they do, and we couldn’t be happier to share that with everyone. 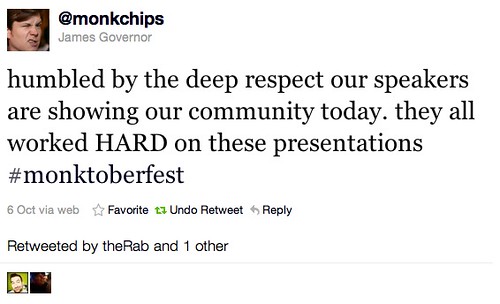 To a person, our speakers were excellent, and had put in real effort to craft their talks. Matt LeMay, for example, had the Bit.ly team run a computationally expensive query just for his talk. The results spoke for themselves, as they did for each of our speakers.

Whatever success we’ve had is ultimately due to the people who came together to make the Monktoberfest happen. Our sponsors, our attendees and everyone who’s encouraged us along the way. Take a bow, all of you: this was your conference as much or more than it was ours.

While we had surprisingly few real hiccups given that it was our first time running an event, the things that went wrong are my responsibility. Not having power strips strung through the venue, for example. And as the otherwise very kind ReadWriteWeb review dinged us, our speaker diversity was poor. It’s true that we did try and get three different female speakers, only to be foiled by scheduling, but we still could have tried harder on that front. That’s my fault, and something we’ll try to rectify if we do it again. Which brings us to…

Everyone has questions about the prospect for future Monktoberfests, from which I infer that they enjoyed this one. For me personally, however, it’s a lot like asking the mother who just gave birth about plans for her next child. Conferences are an immense amount of work, and this one was no exception. So I need to recharge the batteries a bit before I think about the next show, though James is already talking up a London version.

Like the original, however, future conferences are likely to be a function of demand: if you want it, we’ll build it for you.

On behalf of everyone at RedMonk, we thank you.