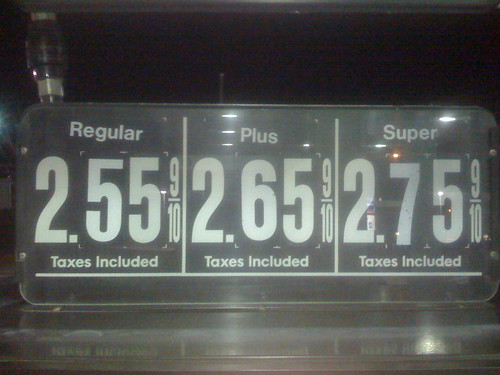 Another week in the books, this time with no planes. Which was well timed, because my potentially Lyme Disease infected leg doesn’t enjoy travel by air at the moment. Really doesn’t enjoy it.

Besides the usual crush of RedMonk duties – which are, as usual, accelerating as we head towards year end – I was, like all of you, at sea in the rising tide of gloomy economic news. Freddie Mac lost $25.3 billion…this quarter. Jobless claims hit a 7 year high. U.S. retail sales plunged. RedMonk client Sun announced plans to trim 18% of its workforce. The Globe speculated on what a depression might look like in 2009. The Evil Empire offered the best free agent pitcher on the market, CC Sabathia, an offer he probably can’t refuse. And so on, and so on.

But as it can’t rain all the time – the current weather notwithstanding – I spent Wednesday night at Fenway Park, and Thursday night in the company of one of the finest groups of people I’ve ever had the opportunity to work with. So, as always, there’s good to go with the bad.

In the meantime, here’s the usual weekly grab bag of items that aren’t getting their own entries.

It would be difficult, I think, to have worse timing than CLEAR. Amidst the worst economic crisis in close to a century, they raised their prices…by 2X. From the $100 I paid last year, new customers are asked to surrender $199 (as a previous customer, I can “renew” for the low low price of $159). Which is, I think, wildly overpriced. In a letter to its customers, CLEAR CEO Steven Brill wrote the following:

As of October 15, new annual memberships in Clear will cost $199. It’s a price that reflects the rapidly expanding value (and cost to us) of the Clear network. As you know, we have recently launched new airports, including Atlanta, Denver, Oakland, Reagan, Dulles, Boston, and Salt Lake, and we have expanded coverage at all three New York airports. We expect many of the other key remaining airports across the country to follow soon.

Our market tests indicate that because of this expanding network and the reputation we have won for delivering on our promises, our new price – which is necessary to solidify our business as we move beyond the start-up phase — will be well received.

I’m not sure where, precisely, they market tested, but I don’t know many customers that are likely to receive a doubled price well. This one certainly doesn’t fit that description.

Mostly because CLEAR has done little to benefit me. I made one flight, out of SFO, that I would have been extremely unlikely to without the benefit of CLEAR. But apart from that, it saved me little time and continued to make me uncomfortable with their policy of “inserting” me – read cutting me – into the regular security line. If they were to use the doubled rates to man and staff their own security lines, it would perhaps be worth considering.

But paying nearly twice as much for a service I already considered overpriced seems a poor economic decision in this economic climate.

Though its nominal purpose was getting ESPN analyst and former Cincinnatti second basemen Joe Morgan, well, fired, Fire Joe Morgan was symbolic of something far more important (although I would certainly welcome less Joe Morgan: unlike Tim Bray, I think Morgan – who was a player for the ages – is terrible as a broadcaster, with a poor delivery, poorer communication skills (“slidepiece?” really?), and an overt antipathy to modern analyses of the game.). As its tagline, “Where Bad Sports Journalism Comes To Die” indicates.

Whatever FJM’s original mission was, it ended up as the symbol of and champion for rational analysis. By scathingly dismantling the fevered and unresearched musings of baseball’s fourth estate, it highlighted the willfull ignorance and the inability to construct fact based arguments that characterized its targets. And it did all this with unparalleled humor – one of the creators is a writer for The Office, after all.

Baseball is about more than numbers, of course. And statistics may – and often do – lie. But not as often as people, as Nate Silver – a baseball statistician himself – demonstrated quite adequately with fivethirtyeight.com.

And yet baseball writers – professional ones – decried the availability of data and the rising importance of stastical analysis, claiming it was ruining the game even as it reshaped it (leading to two Red Sox World Series titles in the process, thankfully). Nor did they savage statistics in secret; they did so publicly, believing that the population at large were fellow disciples of the more-data-is-bad church.

Eventually, some of these curmudgeonly writers were unceremoniously shown the door.

For whatever part that FJM played in such transitions, which I view as nothing less than a victory of rationalism over fundamentalism, I thank them. I’ll miss that, just as I’ll miss the laughs.

My best to dak, Junior, Ken Tremendous and the rest of the gang.

Like Hoover’s Tim Walker, I’ve seen the question of a floor for fuel pricing surface repeatedly. My link to the above over on FriendFeed even saw some debate on the subject. As one sadly undereducated in economics, I cannot argue the subject intelligently.

But the idea seems at least worth pondering because, as I’ve argued, economics are the only real change agent. As history proves, whether it’s the recent decline to sub $2.00 a gallon prices, or the painful reality that we learned nothing from the gas crisis of the 1970’s.

Am I thrilled about the prospect of disproportionately punishing communities like the one I’m living in now? Of course not. But we need real change, and a floor for fuel is about the only real hope I can see for change.

All of that said, such a decision would be political suicide, and this discussion – as such – is almost certainly destined to be academic and irrelevant.

So the Portland Press Herald – my local major daily – found themselves a buyer. Assuming, of course, that said buyers can secure the financing. That’s terrific.

What I’m curious about, not merely as a potential customer, but a part time resident that relies on the coverage for all manner of regional information, is whether or not the new owners have a plan to bring the publication into the 21st century. To its credit, the Herald does leverage blogs, syndicated feeds, and other non-traditional newspaper technologies to some extent. But the business model behind it, to the extent that I understand it, is still traditional media. Which means that whoever owns it, it’s likely to struggle.

To me, the Herald needs to focus immediately on three things:

Whoever owns the paper, I hope they realize the important lesson here: if something isn’t working, try something else.

Still doubt the value of telemetry to real life challenges and situations? You might want to reconsider.