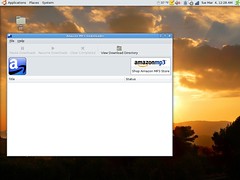 Given that I’ve been waiting months for its release, you’d think that I’d be more excited about the availability of the Amazon MP3 Downloader client for Linux. And I was, initially.

For the one or two of you that don’t track the availability of Linux clients for non-DRM music stores in minute detail, here’s the short version: Amazon made clients available, Adobe AIR-style, for Mac and Windows only. The poor unwashed masses were informed that “a Linux version of the Amazon MP3 Downloader is under development,” but provided with no real timetable.

The importance of the Amazon offering, for me, was the major label support. While largely content with my current DRM-free music vendor – eMusic – there are occasional major label acts that I’d like to buy from that are unavailable on the subscription music service. Enter Amazon.

In spite of the lack of a client, it remained possible to buy from the store. But you had to purchase track by track, and pray that your browser didn’t die in the transmission (Amazon only lets you download once). Worse, album pricing was limited to those able to run the client. Those on Mac or Windows, in other words.

But credit to Amazon, they kept their promise and last week released a downloader client for the Linux operating system. In multiple distribution friendly flavors, no less. All of which is terrific.

Less terrific is the fact that it doesn’t work. At all. In trying to purchase a Working for a Nuclear Free City track yesterday, the browser triggered the client as it should, and then…nothing. No download, no activity within the client, nothing.

Customer service eventually reinstated access to the download so that I could bring it down manually using a machine which has not had the client installed yet, but it took four individual exchanges. Nor was there any word on what the problem might be: the only emails I received were form letters, nothing more.

Initially I thought it might be an isolated problem, possibly unique to my distribution (Ubuntu Gutsy), but I heard today from three other folks that had the exact same problem. Two of those folks were running different distributions (Fedora and Debian).

From which I conclude it’s a problem with the software, not my installation or distribution.

So for the folks out there eager to buy from Amazon while running Linux, I have good news and I have bad news. The good news is that there is a client for you. That bad news is that it just doesn’t work at the moment.

Update: While I’m not alone in my issues, the overwhelming majority of commenters seem to be experiencing no issues with the client. So maybe it is my installation. Still, I’d love to know what.