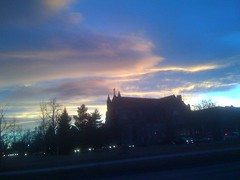 Been a long, complicated week here at the home office. Some highs, some lows, the usual.

The good news is that it’s Friday, the Sox are on TV tonight, and I don’t have to get on a plane tomorrow morning. In other words, I have no complaints.

Per our original contract, the majority of my baseball related musings have been banished from this space, relegated to my own little Sox corner of the interweb (it’s hilarious to be back on a site that measures traffic highs in the dozens ;). As an aside, I’ve actually been a bit surprised at how much easier it is to maintain a second site. While I’m sure that resolve will be tested over the months ahead, it’s been fun so far.

But anyway, as documented on Twitter, yesterday marked the first competitive games for the Sox this season – using the term competitive somewhat loosely, as the opponents were Boston College and Northeastern, respectively. The second contest was broadcast via WEEI – available to me via the interweb at redsox.com – and was a soothing balm to an otherwise rough week.

Tonight, however, is the real deal: the Red Sox, on TV, versus some actual professionals. I’ll be at the Pour House for the ballgame; you should be too.

What’s interesting is that there are actually a few people that agree: I’d believed that I was a lone voice in the wilderness on the subject.

As Alex puts it:

Twitter could be vastly improved if they simply changed the question from:

What are you doing?

A statement that I, personally, agree with. As does Rafe.

Again, the point is not to attempt to impose some half-assed form of censorship on Twitter or its users, but rather to explore the nuances of a flexible and widly divergent medium. Also, to explain how I personally determine the types of streams I choose to subscribe to.

To Lease or Buy?

In the O’Grady family, we were raised to own cars rather than lease them. My parents, and more or less all of my aunts, uncles and grandparents all bought cars and drove them until the end of their practical lives. Which often was years after the last payment had been mailed. At any given time then, only a couple of people in the family were driving new or nearly new cars, but the rest of us were free of the payments which characterize the first few years of ownership and the entirety of a lease period.

While I’m content to drive a car more or less until it’s on its last legs however (and, to own the truth, have a hard time giving them up even at that point), the same cannot be said of a laptop. At RedMonk, we try and target machines for something along the lines of two year lifespans.

This insistence on newer hardware made me consider something I haven’t before: should we be leasing our laptops rather than purchasing them? Eventually I’ll have my brother run the numbers and see what the math looks like, replete with fancy NPV calculations and so on, but in the interim I’m curious as to whether or not any of you would recommend one approach or the other. Are there significant limitations to leased machines that I should be aware of?

One of the downsides to putting your audience before yourself while Twittering is the need to throttle entries that are pertinent only to a select audience. On an isolated basis, there’s no issue: like many, I regularly will reply to an audience of one using an @ tag. But it’s not something I’m comfortable doing multiple times per day, every day.

Thus potential use cases such as informing my Denver Twitter contacts that I’m having lunch at McCormick’s or beers at the Pour House can’t be anything more than sporadic mentions here or there, according to my self-imposed rules.

As a result, my initial inclination was to build a separate interface on top of WordPress just for the use cases I’m talking about, but then I considered the fact that Dodgeball was built explicitly for this purpose. Though neglected by Google and abandoned by its founders, the service is indeed still up – which surprised one of the folks I invited.

The early returns are not promising, though they’re unquestionably jeopardized by the fact that most of the Denver folks are out of town this week. It’ll be interesting to see, however, whether Dodgeball can pry its way into the behaviors of the Twitter addicted. Because I’m not terribly eager to wait for Twitter to add support for groups.

Anyone else using services to easily and frictionlessly connect groups, whether geographically colocated or otherwise?

Upon hearing that I’m likely to purchase at some point in the future – whether it’s now or in the August timeframe – a Lenovo X300 – several folks have asked me why I intend to purchase a device with an SSD, which is not only a relatively new technology but one commanding a significant premium.

At this point, there are three reasons I think the expense is justified, at least for my requirements:

Anyway, that’s my justification, so don’t burst my bubble.