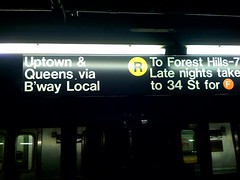 Ask and ye shall receive. John and Kevin asked for a review, so here are my initial reactions.

Of course I’ll spin it that way, as if I’m altruistically documenting my experience for others and wasn’t planning on posting it anyway. As if posting massively delayed reviews wasn’t my gig. To own the truth, however, a delay of six months – the iPhone was released on June 29th according to Wikipedia (and cracked 5 days later by DVD Jon) – is a bit long, even for me. But that’s simply how long it took me to be given one, ergo the supremely belated (and thus irrelevant?) review.

The nutshell version, for the impatient and anyone with any regard whatsoever for their free time, is that Mossberg was right: it is unquestionably a breakthrough device. What kind of device – he considers it a computer – is a point worth debating, but I won’t do that here. In one dramatic step, Apple has at once exposed virtually every other mobile interface as childishly primitive and dramatically upped the bar in a realm not exactly known for rapid innovation (more on the why later). Even after using the phone for three days – most of that away from an iTunes equipped machine – that much is obvious. Next to the iPhone, my previous handsets have been, to paraphrase Yeats, “paltry things, tattered upon a stick” (for the record, I don’t know if the opening line for that inspired the title for the McCarthy novel, but I’d guess the answer is yes).

That said, it’s a significantly flawed creation. Whether the flaws render it unsuitable for your purposes depends on, well, your purposes. I can’t say that it will be a permanent solution for mine, particularly if as promised a 3G version is introduced early this upcoming year, but for the time being it’s an enormous upgrade to my mobile experience. Even lacking the 3G connectivity that both my LG CU320 and Nokia N75 had.

Now, for those interested in the excruciatingly detailed details…

(I like to end on a positive note, or I’m addicted to alphabetical listings – take your pick)