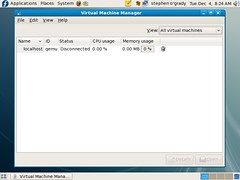 Fedora had a chance – a real chance – to unseat Ubuntu last week. Not for my primary machine, the Thinkpad, but for the Ultra 20 workstation. And just to address the rumors, no one’s switching back to Windows. The laptop is Gutsy and is likely to be until Heron is out; I merely need a Windows instance handy for testing, which neither Lenovo nor Microsoft is making easy.

Anyway, on the workstation front, Ubuntu had done nothing to deserve a dismissal, but the cool kids in #redmonk kept bragging about all of the new hotness in Fedora, and, well, I wanted to be cool too. So it was out with Ubuntu, or maybe it was Indiana, I can’t remember, and in with Fedora 8. Or it would have been, were it not for the fact that Fedora doesn’t make available LiveCD’s for the x86_64 architecture, only DVDs. Why? You’d have to ask them.

But after an aborted attempt to get Fedora running on a memory stick – the instructions assume you already have a running Fedora instance and I tried to cheat – I finally caved and walked up the street to get a DVD burner. I probably needed one anyway, but this wasn’t how I’d planned on being introduced to the OS.

Once I got it burned and laid down on the machine, I set about experimenting with the featureset I expected would differentiate it: virtualization. And differentiate it did. Once I figured out how to install it, anyway.

Looking around the menus, I didn’t see anything handily labelled “Virtualization.” This was because I hadn’t managed to include it as part of the default install. Knowing a bit about the packages I wanted, I was installing KVM and related libraries piecemeal until I ran across the virtualization package under “Add/Remove Software” (click the “Browse” tab, then “Base System” and scroll down). That conveniently dropped in virtually everything I needed. At which point, I expected to be off to the races.

The reality? Not so much success as much as total failure.

Opening Fedora’s Virtual Machine Manager, which is a very nice piece of software despite my lack of success with it, I first attempted to virtualize Ubuntu Gutsy. Start with what you know, I figured. Curiously, however, I had to manually start the libvirt daemon as it hadn’t been initiated despite the install and subsequent start of the Virtual Machine Manager. Once that was figured out, I created a Gutsy image and began the install. Everything went smoothly until it failed, complaining of “corrupt packages” and an inability to connect to the network. Given that I later used to the same disk to create an instance of Gutsy on VMWare, I think the media is fine. And the network connection worked beautifully during the initial part of the installation. So I did the easiest thing I could think of, and gave up on Gutsy.

Instead, I’d try to virtualize Windows Server 2008, as I knew Senor Dolan had successfully done just this. Forgoing his instructions, which were command line based, I thought I’d try to use the GUI just as an experiment. That failed, as it was rumored it might, due to ACPI errors. At which point I turned to Michael’s CLI method, which also failed because Fedora returned a “command not found” to kvm. Turns out that kvm is instead qemu-kvm on Fedora: my bad. After I figured that bit out, the install of Windows Server 2008 promptly bluescreened.

Next, I tried to virtualize Vista. Blue sreen numero dos. Complicating my efforts with all of the above were the slight differences between Fedora and Ubuntu; you can’t modprobe on Fedora, apparently, even as root. Nor can you sudo, by default – su is your only option.

Given these frustrations, and having killed more hours than I’d alloted on all of the above, I decided at that point to cut bait. Fedora 8 was blown away in favor of Ubuntu and VMWare, the latter of which installed both Gutsy and Windows Server 2008 relatively seamlessly (Vista probably would have loaded but my tester’s copy has a bad license key for it and thus I couldn’t proceed).

So Fedora’s virtualization is terrible, then, right? And VMWare is the future?

Not quite. VMWare is unquestionably more polished at this point, as well as more stable and more usable. But my failures with it notwithstanding, the open source virtualization story is impressive for an early stage product; judging by others’ results, anyway. The Virtual Machine Manager, as mentioned, comes with a nice, simple GUI that’s very usable once you get the hang of it (connect to the localhost before you try creating VMs). More importantly, the virtualization technologies under the hood in KVM and Xen are more capable than many realize. Xen, as an example, is the underlying technology behind Amazon’s EC2, and KVM is hugely popular with the distros due in part to its light weight. Both are eminently capable of virtualizating the very operating systems I failed to, and my lack of success is at least as attributable to me as it is to the packages themselves.

For the time being, however, Ubuntu remains my preferred distribution, simply because I think they’ve done a better job of making the distribution usable, and without the virtualization to differentiate it Fedora’s not the best choice. That said, Fedora showed enough even in a brief, unsuccessful trial to indicate that it will push Ubuntu in the months ahead, which should be beneficial for both distributions and their users. Competition is good.

More interesting to ponder is what Fedora and its virtualization capabilities mean for VMWare. Granted, I could get nothing working. But part of that is my own ignorance, and it can’t be questioned that the basic building blocks are in place. Not necessarily on the UI and management sides, as yet – VMWare is way out in front in that regard – but how long will it be before the hypervisor and basic virtualization is commoditized and freely available? 18 months? 12? 6?

Undoubtedly, VMWare would answer its critics by contending that it will continue to innovate to stay ahead, and certainly it’s got the talent to do so. They’ve poached some of the better kernel engineers on the planet at this point. But what we’ve been discussing within RedMonk and with a few external parties recently is at what point the firm begins to compete head to head with the entrenched systems management players. After you get by the technical challenge of supporting guest operating systems, after all, comes the real challenge: managing them all.

So while I’m certainly not predicting doom for VMWare as some are inclined to do – like Microsoft, they’re massively entrenched in their particular market(s) – I am very interested to see how they navigate low end commoditization from open source and increasing competition at the high end from vendors that know systems management at least as well as VMWare does. Oh, and then there’s Microsoft.

A chain of thought that I would not necessarily have arrived at without my Fedora experiment; proof that we can learn even from our failures. Fedora may not have poached me as a user yet, but I’ll be sure to try it again in a few months. Who knows what I’ll learn from that experience.