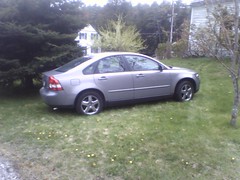 You can call off the search parties. Unlike Flight 19, I was never destined to stay lost.

2114 miles, 1 speeding ticket [1], and I really don’t even want to think about how much gas later, I find myself returned to Denver. A land of fair weather, thin dry air, and suspiciously ample bandwidth. Backups and rampant YouTube viewing, here I come.

The drive itself was pleasantly uneventful, with no impoundings, blown tires or The Road style apocalypses marring my transition back to my erstwhile hometown.

Day 1 consisted of a mere 687 miles (La Quinta Inn of Erie grades as acceptable), thanks to a belated start attributable largely to a laziness on my part. Day 2, better known as yesterday, was the heavy lifting of the trip, killing 1042 precious miles from the faithful steed’s odometer (Grand Island’s Holiday Inn is a staple of this trip – thumbs up). Day 3 saw me knock off the final 404 miles at speeds that – in parts – probably would have resulted in immediate imprisonment, despite the fact that they were eminently safe given conditions and the alarming inability of the interstate to curve.

Though the trip’s success was initially jeopardized by the implosion of my iPod two weeks before the trip (it’s still incapacitated), but I was able to stave off madness with a combination of conversation, audiobooks and those shiny things we used to call Compact Discs. Disappointingly, I didn’t have anything burned with new fave the Avett Brothers handy (and wouldn’t you know it, they’re playing Boston tomorrow night?), but the two dozen unlabeled randoms I had laying around were pressed into services and rose to the task admirably.

For my next trick, I’ll try and catch up from my prolonged absence. I’ll probably have to start with the 400+ unread messages patiently stalking me from the comfort of my Inbox, but if there’s something urgent I recommend – as usual – alternative modes of communication. Time is going to be a factor in this process, as I’m right back on the road next week, first to Austin for a client visit and thence back to Maine for Thanksgiving. If you’re wondering why I drove all the way back from Maine mere days before I had to return for the holiday, you’re going to have to be patient, because I don’t know either.

Will get to other work matters as quickly as I can, and feel free to come find me in #redmonk. Just not tonight, as I’m about to pass out on my couch with a cat curled up on my chest.

It’s good to be home.

[1] Note to the Ohio State cop in question: you can keep the ticket, I’ll keep the World Series title. How you like them apples?