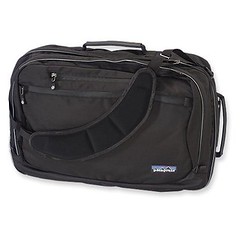 It was, I think, the fact that I nearly cursed out my defective wheeled bag in front of a pair six year olds and their mother that finally convinced me that it should be replaced. That I have yet to do so is solely the fault of the Patagonia outlet in Freeport which has yet to procure an alternative for me, though I’ve been visiting regularly all summer in anticipation of such a happy event.

This near disaster – I was able to reign myself in just in time to preserve the innocence of the youngsters – was not the first occasion I’ve had to bemoan my choice of the Patagonia Overhead Shed. I have, in fact, complained of it in this space previously. And that was before the handle declined to extend and retract properly, a failure that only sealed its fate. What good is wheeled luggage if you have to bend in half to wheel it?

This piece, then, to be retired effective immediately. Apart from the aforementioned defective handle, the bag is generally well constructed. It is, as I discussed before, the Doctor’s Bag style opening that renders it unfit for service. The novelty of the design fooled me at first, obscuring the fact that it’s the most inefficient design for a bag I’ve seen in a long time. To its credit, Patagonia’s own testers have expressed similar concerns, saying that “the size and shape of the Overhead Shed make it a pain to pack.”

Fortunately for me, I’ve already selected a replacement. Fortunately for Patagonia, this experience has done nothing to dent my confidence in the brand – the Overhead Shed being nothing more than a poor decision on my part. Succeeding the Overhead Shed will be one of these which comes – unlike its predecessor – highly recommended. Because Freeport does not seem destined to acquire one of these any time soon, I’ll be obliged to pay full price (~$150) in Boston when I stop over next Tuesday en route to New York.

The advantages of this bag are many, but the most compelling is that I may be able to cut myself down to a single bag for travelling, instead of my customary briefcase plus roller bag. This bag is, more or less, my current briefcase plus another 1100 cubic inches which should be enough for the two or three day trips that are my staple. Whereas it would inconceivable to place my laptop within my current roller bag, storing it the new one is no more risky than its usual home in the briefcase.

What would be nice, then, if I’m to travel without a briefcase would be a sleeve for the laptop (12.1″ Thinkpad X40) so that I’m not carrying it around conferences and such quite so unprotected. Said sleeve should also have enough room left over for the machine’s AC adapter, if possible. Does anyone have any recommendations in that department? Regrettably, Patagonia has not yet seen fit to manufacture such items.

Also, have any of you made the adjustment to a single bag? Travelling lighter is rarely a bad idea, and this could be the perfect solution.