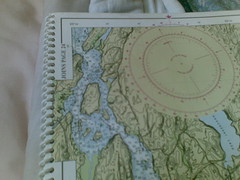 As my friend and I dutifully explained to his Alaskan girlfriend and her little sister over Memorial Day weekend, that particular holiday is eagerly anticipated in the Northeast because it marks the beginning of summer, no matter what the calendar may claim . The onset of Friday afternoons spent in traffic trying to get somewhere near water, lazy weekends of grilling and wiffleball, and the usual glut of would-be summer blockbusters.

This year? Not so much. Summer’s never quite managed to settle in for a stay. It will drop by for a visit, and then disappear for a period of weeks, leaving in its wake storms and weather fit for autumn. The stripers are so confused, I was told an hour ago by another frustrated fisherman, that guides that have worked these waters for 20 years haven been compelled to relearn everything they knew.

For all the unusual weather, however, there are signs that the Fourth of July may be after Memorial Day’s job, heralding the change in season. Not on the weather front, of course; it’s still windy, cool, and overcast – hardly summer weather. But the Fourth has at least brought with it the summer people.

Robinhood Marina, which has been painfully empty most of the season, is gradually filling its moorings. The Georgetown boat landing, right across the cove, is seeing more and more people From Away who can’t kayak go kayaking. The streets of Brunswick are full of people who don’t mix up their “ahs” and their “ers.”

And then there were the Chops, the planned fishing destination for today that I only made it to because I was able to coax our GPS back to life. Ever seen Jaws? Remember the chaos of the Amity harbor after they announced the bounty on the shark? The only difference between that scene and the one today was the lack of rifles. And, presumably, the absence of an improbably sized white shark (though we do have a number of its close relative, the Porbeagle, offshore from what I’ve heard). When I pulled in to the lee of Line Island, there were boats everywhere, one on top of another. Drifting into one another, on occasion. Fun stuff.

But crowded conditions and crappy weather be damned. The Sox celebrated our nation’s independence with a win, and the Yankees celebrated it with a loss. On Steinbrenner’s birthday. And at the end of the day, that’s far more relevant than any global climate change induced weather patterns, don’t you think?