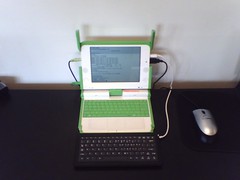 OLPC Hooked up to External Keyboard and Mouse

As an analyst, my job is to bring you research and insight into the most important technologies and developments in the software world. With my utter lack of coverage of the One Laptop Per Child (OLPC) project, I’ve failed in that responsibility. Failed miserably. When the OLPC folks mentioned that they called yesterday’s analyst and press meeting to help the press and analyst corps digest the mission and purpose of the project more clearly, I highly doubt they were targeting me specifically. But they might as well have. That’s the bad news. The good news is that the remedy is relatively easily administered, thanks to yesterday’s event; I’m now in a position to impart a relatively significant amount of information about OLPC the organization and OLPC the project.

While regrettable, this underestimation is perhaps not surprising in light of the first impressions of the OLPC. Those of you that have heard of the OLPC before likely know it from cursory descriptions in brief press pieces – or possibly from grainy pictures (like the one at right) of a laptop-like device decked out in a childish primary color scheme. If you’re anything like me, you might have assumed that this was a Fisher Price caliber piece of hardware. Something mildly interesting, but of no more importance than an Etch a Sketch or Speak and Spell.

After using the actual hardware, and hearing both the vision behind it and the technology underneath it, I can tell you that if you’re possessed of that opinion, you may want to rethink it. Immediately, if not sooner.

The basic vision that Nicholas Negroponte and his OLPC colleagues laid out yesterday is fairly straightfoward. The ambition is nothing more and nothing less than to make sure that underprivileged children across the world have the opportunity to learn. Negroponte’s definition of learning is different than what you may be used to: he’s not talking about established curricula, or even schooling. Indeed, one of the validations of the potential of the project came when a teacher in South America fell sick and had to go home for the day – and the kids all voluntarily remained in school. Towards that ambitious goal, the OLPC effort would offer up a laptop of sorts. One that can connect children, and give them a basis for learning on their own and with each other. The entire project, actually, is an outgrowth of the findings of an educational colleague of Negroponte’s, who discovered in 1968 that children learned while programming – and debugging.

To be useful in any sustainable fashion, however, the laptop needs to be designed to an entirely new set of tolerances. Designed, in fact, to the point that it bears only vague traces of its laptop pedigree. The first and most obvious problem is power: with available electrical outlets about as common in developing nations as they are at LAX (I challenge you to find one there), the devices need to a.) consume very little power and b.) be capable of running off of non-traditional power sources – be those solar panels or manually drawn flywheels. The specs for this lower power device? 700 Mhz chip (almost twice as powerful as the PII 400mhz that still runs Windows 2000 back at the home office) and 256 MBs of RAM. OLPC has addressed both the consumption and generation via battery choice, highly customized software that disables the biggest power consumer (the motherboard) on idle activity, low power screens, and so on.

While there’s a paucity of electrical outlets, however, there’s typically not a shortage of light. So in addition to the ability to leverage that as a power source, the display design needed to take that into account. Laptops, as any of you that have them already know, are not terribly useful in direct sunlight. LCD’s are simply unable to cope with direct sunlight, thus thwarting my efforts to work off of the dock up at the family compound in Maine. The OLPC display, on the other hand, is “dual mode,” meaning that it’s readable in direct sunlight or with a backlight.

In addition to the lack of power and the overabundance of sunlight, the machine has to to cope with conditions that would challenge even the more rugged of the corporate laptop set. That means being dropped, being immersed in water, being bombarded with dirt, dust and other substances that tend to not get along well with electronics. As should surprise virtually no one by now, the OLPC is designed with all of the above in mind. Testers apparently kick the hell out of these things on a regular basis, and as the Timex ad once said, they’ll take a licking and keep on ticking.

What do you have then? A device that is low powered, will run for a long time on whatever available power sources can be scrounged, and is capable of functioning for extended periods of time in challenging environments. All good. But not terribly important if kids aren’t interested what’s on the device.

Cue the software story. OLPC is a fascinating amalgam of open source software (Windows will reportedly run on the device, however), networking, and Software-as-a-Service (SaaS) components. The basic software pieces are a slimmed down 100 MB (seriously) version of Red Hat’s Fedora offering, OpenFirmware, Dbus, X windowing system, Matchbox window manager, GTK framework, Python, and more. From this foundation springs the visual UI called Sugar. Designed with the understanding that its intended audience is both young and quite possibly illiterate, Sugar is heavily icon driven. The UI provides access to the following applications Paint, BlockParty, Camera, Calc, Write, News Reader, Etoys, Web, Read, Media Player, TamTam. Before you ask, no, I forget what BlockParty and TamTam are.

As Red Hat’s Havoc Pennington discusses in an unrelated post, however, software these days is of limited utility when disconnected from a network. Thus substantial attention and design has gone into the connectivity story. Although it’s absurdly expensive in some areas – 3K per megabit in sub-Saharan Africa, according to Negroponte – bandwidth is assumed to come from somewhere to a single location (school, community center, whatever) from one of the DSL/satellite/etc options. The one connection then is all it takes; the OLPCs are designed to harness one connection and share it amongst themselves in what’s termed a wireless “mesh” network. It’s like the internet connection sharing option in Windows, except that it actually works seamlessly. Moreover, there’s a really fascinating ability for each machine to “see” and connect to its peers, to play games, share writing, and so on. I didn’t have enough time to explore this fully, but it’s something I haven’t really seen done well previously outside of specialized instances like iTunes sharing.

With connectivity, however, comes a demand for online services and storage, and it was for just that that the OLPC approached Google and said, “We’d like to sign every OLPC user up for a Gmail account, and by the way we’ll be violating your terms of service.” To their credit, Google did not object, and as a result each owner of an OLPC will have a Google account as well as the availability of significant online storage.

What of the organization behind this remarkable device, you might ask? OLPC is a non-profit, structured that way according to Negroponte to preserve its clarity of focus. Its dedicated to massive scale; while bandwidth, it was pointed out, scales amongst multiple connected devices, the devices themselves do not. This means that these things have to be cranked out by the hundreds of thousands, and even at the low cost of $175 (up from the initial expected $100 price) that involves decidedly non-trivial sums of money. Money that will, in large part, flow from governments to Citibank, which then – on a pro-bono basis – manages the finances from there, compensating in turn the individual suppliers for the project.

This project would be interesting enough just for the technology that goes into it – patches from the OLPC work have already come back to DBus and other projects according to Red Hat’s Chris Blizzard – but the potential social impact dwarfs even that valuable work. The potential impact of this project, in bringing millions more underprivileged kids worldwide online, is immense. It’s like some massively a scaled out version of the Primer from Neal Stephenson’s Diamond Age. In short, it’s a very ambitious endeavor; I hope that before I call it a career, I’m able to work on something of similar importance.

At any rate, it’s my hope that this entry mitigates at least in part my earlier failure and brings you up to speed on where my thinking is vis a vis the OLPC. I’ll try to avoid repeating my error in future by bringing you more timely analysis of the successes and failures of the project generally. Meantime, my thanks to the OLPC folks for their kind invitation to attend yesterday’s event.