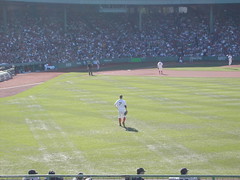 Long have I feared that this would someday come to pass. Would that it were not so, but neither the anticipation nor the inevitability have in any way braced me for the sense of loss. My only reprieve, such as it is, are the few brief months that lie between me and the physical manifestation of this regrettable chain of events. Rarely, if ever, has good news been so difficult to accept.

Good news for the player, because he’s landing on a contending team in a good baseball city, with a front office that values him. Bad news for us, because that city, that team, and that front office aren’t ours.

It’s not realistic to expect that one can convey the depth of the affection Red Sox fans – to a person – have for Christopher Trotman Nixon, so I won’t try, as I have before.

I’d simply like to say thank you, Trot. Thank you for the memories, the great defense, the dramatic home runs, the contributions you and Kathryn have made to the Boston community, and most of all for appreciating what that uniform means to all of us.

You’ve made us proud since the moment you were drafted, and have always represented our city well. We’ll be rooting against your team, but never against you.

If it all possible, I’ll be there May 28th to stand with 35,000 other fans and give you the recognition you deserve.

In the meantime, I wish you nothing but the best in Cleveland.