(DISCLAIMER: what follows is a long – and completely off-topic – Red Sox post. For my regular readers, this may be one to skip. But it’s important to me, and will be the last Sox post for a while, so here it is. If you read it and are bored, you can’t say I didn’t warn you) 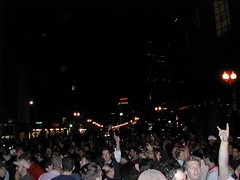 No words can describe this. The closest I can come to it is by echoing the comments of Fishburn’s character from the last Matrix movie, where after the end of the war, he blinks his eyes, looks around, and says “Is this real?” Is it? Or is just an illusion of the Matrix? I won’t get into some post-modern debate of what is real here, but suffice to say that that’s how I feel right now. Is this real? Did this just happen? Did we just get the win that I’ve been waiting for, my parents have been waiting for, and my grandparents have been waiting for? Or is this some terribly cruel trick?

For the sake of my sanity (or what’s left of it, anyhow) I’ll operate under the assumption that it did happen, and that we are the world champions, and that I do not have to listen to any more “1918” chants (though I’m looking forward to starting up some “YEAR TWO THOU SAND” ones shortly) or any more stupid Fox segments on “the curse”. That I don’t have to listen to the vitriolic and ceaselessly negative Dan Shaugnessy (I will not link to him, find him on Google if you must) prattle on about a nonsense curse that he continued to propagate for his own financial gain.

This conclusion which seems so obvious in retrospect it’s startling – great starting pitching, tough lineup, solid bullpen – was difficult, if not impossible, for any of us to believe. History and the media (not to mention a few very solid other teams) were against us from day 1. But slowly, we were converted. Slowly, we came around. Slowly, we nurtured a hope – even if we were afraid to discuss it out loud – that this might be the year. And we began to believe. By the time the Sox became the first team in baseball history to come back from an 0-3 deficit, we were all believers. It was simple faith. I never would have said it out loud, and instead made noises about how strong the Cardinal lineup was, but I knew that we’d win this series. Not thought, not suspected – knew. I believed.

I’m gonna tell you a big bad story, baby
Aww, it’s all about my town

It was this belief that led me down to Boston last night to watch the final game of the series with a few friends of mine. We watched, hoping, praying, that this would be night, and when it was we spilled out on the streets of Back Bay with thousands of other people. Everyone wore similar expressions of mingled shock, disbelief and pure euphoria and it was obvious after a few minutes – and I say this with affection – that we’re not very good at celebrating. Nobody knew quite what to do – we simply weren’t trained or prepared for this outcome – and as a result we all ended up milling around awkwardly high-fiving perfect strangers.

Yeah, down by the river
Down by the banks of the river Charles (aw, that’s what’s happenin’ baby)

In trying to digest these events I find that I can’t. I am, I think, exhibiting symptoms consistent with the clinical definition of shock. But a few thoughts come through clearly: this achievement could not have been improved in any single area. It was, to quote James Carville from Old School, “perfect.” (THAT’S HOW YOU DEBATE!) The agony of the first three games of the ALCS was only the foreword to the biggest victory in the history of the franchise, the answer to our history of postseason failures. Just about every single person on the roster contributed in some form or fashion – without Dave Roberts, for example, we’re not having this conversation. Ortiz, once released by the Twins, accepts the mantle of Mr. October. Nixon redeems his series last night. Pedro shows what a lanky 180 pound Dominican kid from under the mango tree can do. Schilling writes his name into post-season lore forever. Foulke forces me to accept that a closer whose best pitch is a changeup actually can be successful in the post season. And on and on. It was a team victory in the truest sense of that word, and as a result is one to savor. The icing on the cake is that this team, the bunch of self-described idiots, is one that Boston not only adores but can be proud of. For all the focus on Damon’s Jesus look or Arroyo’s terrible cornrows, overlooked is the fact that everyone stowed the personal agenda, their own needs, for the achievement of something special. Like us, I don’t think they know how special yet, but they will. The players on this team are about to be deified by a Red Sox Nation that has been waiting for this in nearly every case for a lifetime. If you want to see why this is so important, head on over here. I defy anyone looking at that to a.) emerge with a dry eye or b.) maintain that the Sox are just a team. This win, and everything it took to get here, has permanently altered the outlook for an entire region of the country. It won’t solve the world hunger crisis or bring us peace in the Middle East, but it’s done something nearly as difficult – brought hope to as Calvinistic and cynical a population as there is in the US.

That’s where you’ll find me
Along with lovers, fuggers, and thieves (aw, but they’re cool people)

This is all a very long winded way of explaining why, wandering the streets of Boston from Fenway to Government Center last night until the wee hours of the morning, I couldn’t really fathom what had just happened. Unfortunately, my attempts to capture that zeitgeist photographically for later processing and consumption failed miserably (see Nat or Joe for better efforts. They’re either more talented or have better gear. Or more likely, both). Out of nearly 200 shots, I got maybe 10 or 12 usable images. And then again, maybe that’s for the best. I don’t think a picture – in this case, anyway – is worth a thousand words. You just had to feel it. Everyone should feel this at least once in their life. So thanks to the Sox ownership for giving us what we’ve all been waiting for for so long, thanks to the players for giving everything they had, thanks to the players no longer with the team that gave their all for the team for their careers (you know who I’m talking about), and most of all thanks to my friends and family for supporting (or at least tolerating) my Sox addiction for all these years. I’ll see you all at the parade on Saturday, after I’ve had the chance to watch the 7 hours of Tivoed coverage from last night.

(If the stuff in italics has really confused you, you’ve never been to a Sox game. The lyrics are from Dirty Water by the Standells, performed following every Sox win and has been played today at the RedMonk office approximately 1000 times).

P.S. Now let’s start figuring out the free agent situation (sign Pedro+Tek) for next year, because while this was amazing, two in a row would be even better.