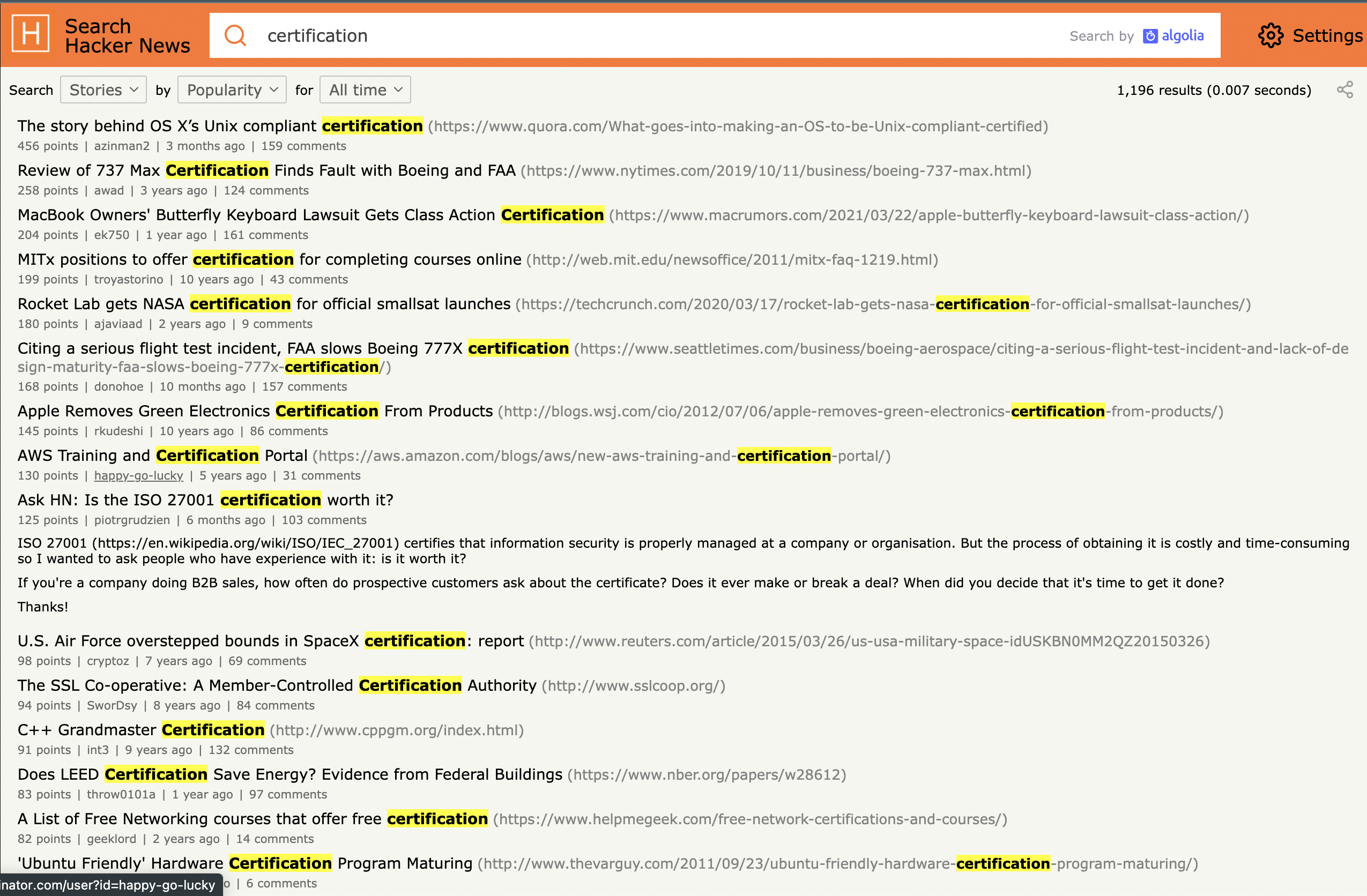 Search for the word “certification” on Hacker News. What results do you think you’ll find? Not much, I’m afraid. As of May 2, 2022 of the 28.4 million posts, fewer than 2,000 contain the word “certification” in the title, and the majority of these deal with compliance certifications, not educational certification programs. In comparison, the terms “tutorial” (14,217 results), “education” (12,394 results), and “course” (16,428 results) are all relatively well represented. Even when I adjust my search to include comments the number of mentions does not increase significantly enough to change my core argument (17,383 results out of 2.5 million).

This absence should alarm employers and vendors alike. Organizations invest millions of dollars into their certification programs and, according to Pearson Vue, “Employers are prioritizing upskilling efforts” by paying for their teams to earn certifications. But generating interest in the certification space among practitioners is deeply challenging. Certifications just aren’t exciting or sexy: at least not from the perspective of many IT professionals and software engineers. Hacker News has so far not been a consistently effective means to natively advertise certification programs. What has drawn comment from this community is 1) the subject of nontraditional education models, and 2) sharing programs perceived by the community to be of high quality and a good cost value.

How is Certification Discussed on Hacker News?

To answer this question let’s take a look at some of the most popular posts that do concern developer certifications. Tellingly, the most popular is a decade old, “MITx positions to offer certification for completing courses online,” and it mostly features debate about the merits of CS degrees versus non-traditional, career-based credentialing. According to SiVal’s top-comment:

The cost of an American university education is ridiculously more than its value. It should be crystal clear that most of what you are paying for is the credential, not the education. The first elite university to break up the monolithic credential into an a la carte system of finer-grained credentials, with high standards backed by the reputation of the institution but open to all, regardless of how they learned the material, will change the world of education forever. Each narrow credential will move independently to its true market value (sorry, lit crit professors), people will pay much less by paying only for what they need, yet people who would never go back to get another whole degree will frequently go back for additional narrower credentials over the course of a career. Elite institutions can stay elite by keeping their standards high and may end up making more money than they ever did under today’s absurd system.

The article made it clear that MIT was desperate to avoid diluting their own brand equity (“we’ll grant certifications using a subsidiary with some other name so there’s NO confusion”), but it looks to me as though the industry is heading in the direction I’m talking about one way or another.

This philosophical complaint against the traditional education system is well worn, echoing libertarian arguments such as Bryan Caplan’s The Case Against Education. While my series on certification by-and-large skirts this grander subject, acknowledging its continuing salience among the established software engineer community is important. Many developers are less concerned with certifications per se than the break-down of tired, over priced, establishment educational structures.

The next most popular post is from 2017, and titled “AWS Training and Certification Portal.” It features comments praising the rigor of the AWS certification program (the sort of word-of-mouth promotion I have discussed before in this series). According to brentis:

The AWS solutions architect [is] legit and well-respected. Also among the highest paying. Can’t really fake your way [through] either, plus the test is cheap to take.

Less popular posts vary in subject matter, and I don’t have space to summarize them all. For example, one community member asks for advice regarding the value of ISO information security certification: “Ask HN: Is the ISO 27001 certification worth it?” (caveats aside, it is, apparently). But perhaps most disturbing for those hoping to cultivate enthusiasm among this crowd is mothsonasloth’s 2020 post: Software certifications; a waste of time and money (2018).

From So What? to What Now?

If very few in the Hacker News community are talking about certification, why write about it at all? I argue there are several reasons to think about this general lack of interest in developer certifications.

As a read-the-fucking-docs community, the attitudes collected on Hacker News ought to be weighed against their self-acknowledged toxicity. Yet, in the notoriously difficult to study landscape of developer sentiment, Hacker News is representative of a significant subset of the developer community at large. Established software engineers tend not to discuss certification programs out of an interest in the subject. They just don’t. While Hacker News is just one venue where developers congregate (and a fraught one at that), the way it approaches certifications suggests larger trends in the online education vertical that cannot be ignored.