“The biggest mistake we made as a company was betting too much on HTML5 instead of native…We burnt two years.”
– Mark Zuckerberg, September 11, 2012

In the months leading up to the Monktobefest, we received around a half dozen offers to build a mobile application for the conference. The majority were the digital equivalent of cold calls, but a few were detailed proposals for real, rich multi-platform native applications with detailed capabilities.

We considered none of these offers.

Aside from the cost, which at least in one case was significant, my personal experience with native conference applications has been relatively poor. The applications have tended to be bloated, constantly updating and, not surprisingly for a one time app, bug-ridden.

More importantly, however, we already had an application for Monktoberfest, courtesy of our friends at Lanyrd. 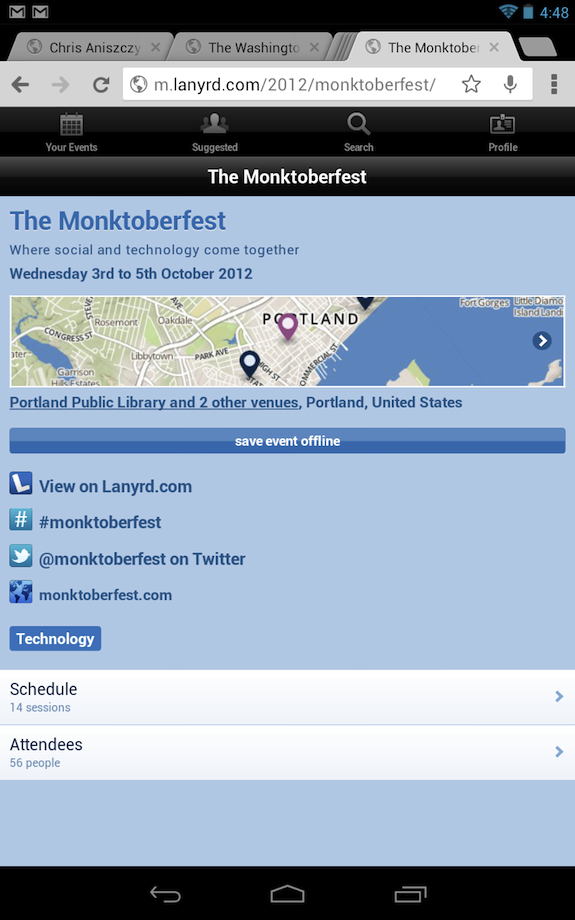 While obviously at a disadvantage to native alternatives in some respects, our Lanyrd-based application had session schedules, venue information, maps and an attendee/speaker directory. And it could even be made available offline. It had, in other words, the majority of the features scheduled to be included in the native applications third parties wished to build for us. For the bargain price of free, then, we created and made available a mobile application compatible with, according to Lanyrd, “Android, Windows, iPhone, Blackberry (even really old ones), Kindle and Older devices via Opera Mini.” From the perspective of a conference organizer, this is an excellent deal, even without the other features Lanyrd offers in non-mobile settings.

There are, of course, many applications that cannot be currently satisified – or satisifed well – by HTML5 based technologies, and in such cases native or hybrid approaches are quite appropriate. But the dismissiveness towards web based mobile applications, fueled in part by Zuckerberg’s September comments, seems short-sighted. In an industry with little appreciation for either history or nuance, it is perhaps unsurprising that attitudes towards mobile/native tend to be so binary.

But it was once thought that webmail would never be a realistic threat to native email applications, and that the idea that enterprises would ever consume applications like CRM or ERP through a browser was folly. If time didn’t make fools of those convinced of those truths, it certainly exposed the truths as foolish.

If our experience is any guide, HTML5 is more capable today than is commonly realized. And it is likely to be more capable in future than anyone currently realizes.