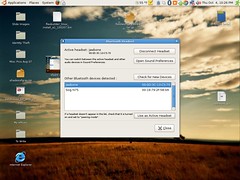 This particular HowTo comes with a number of caveats.

All that said, this does provide what I believe are basic working instructions to first pairing and then configuring your bluetooth equipped Linux desktop with your bluetooth Jawbone headset.

Historically I, like most of the Skype users I know, have used the standard pluggable headsets for calls. These have the advantage of working more or less out of the box, even on Linux, and being relatively inexpensive. The disadvantages, however, are many: they add another set of wires to your kit, they don’t have the sophisticated noise cancelling abilities that the Jawbone does (it’s not marketing, it actually works – except for wind noise), and – worst of all – if you’re already committed to carrying a bluetooth headset for your phone, they add a redundant device.

The ideal solution, then, is to carry just the simple bluetooth headset for both phone and PC usage. The trick is making that work. Here’s how I’ve done that (see the caveats above).

The first step is to “pair” your headset with the machine. Initially, I thought this would be easy as the Ubuntu wiki’s instructions make it sound not terribly complicated, but that didn’t work for me. As nearly as I can determine, kbluetoothd – the recommended pairing mechanism on most HowTo’s I’ve seen – has been deprecated in Gutsy (see the thread here).

Fortunately, I stumbled across Stéphane Graber’s gbtsco package, which will pair the headset fairly easily. Install that via the .deb file he makes available, and just to be safe open Synaptic, do a search for bluetooth, and install everything it turns up. Not saying that’s the right approach, just that that’s what I did.

Once that’s accomplished, fire up gbtsco by typing sudo gbtsco in a terminal window.[1] That’ll pop up a window that looks like the one inset. Next, make sure your Jawbone is off – i.e. not blinking white – and hold down the black button that says “Jawbone” for three seconds. That’ll put the device into pairing mode, during which it will blink red and white alternately. Now, click “Check for New Devices” and the Jawbone should show up.[2] Select Jawbone from the list and click “Use as Active Headset.” The first time you do this, you’re likely to get a flashing permissions icon asking if you want to grant the headset access to audio. Click yes, and if prompted for a code, give it 0000.

You should be paired. To test it out, try playing a WAV file to the headset by typing aplay -B 1000000 -D plughw:Headset /path/to/a/local/wav/file [3] – it should come through loud and clear.

With the headset paired, what remains is telling Skype about it. This will likely be different from client to client, but generally you want to open options, select “Sound Devices,” and make sure that the Sound In, Sound Out, and Ringing profiles are cut over to your headset. Note that at least for me, there are two BT Headset options: one that reads (hw:Headset,0) and one that reads (plughw:Headset,0). The latter works for me, the former does not, but your mileage may vary, as always. See my configuration here.

With those changes made, try a Test Call and see what happens. Hopefully you’ll hear it ring, connect, and a voice will speak back to you.

As I’ve just figured this out, the odds are good that I can’t help you if this doesn’t work. I’d suggest the Ubuntu (or your appropriate distribution) user forums. I hope it does work for you, though, and that you get better use out of your Jawbone on Linux.

I’m not sure if the headsets that Cote and James carry (all three of us use them) were bought or are eval units, but mine was purchased for the regular price from the Cingular store down in Brunswick, so no disclosure here.

[1] If you get the message ERROR: Module snd_bt_sco does not exist in /proc/modules, type sudo modprobe snd_bt_sco.
[2] If it doesn’t, and you’re on a Thinkpad, try hitting Fn-F5 to turn bluetooth on, a little green icon should light up.
[3] I played this one.

Leave a Reply to James Governor’s Monkchips » RedMonk: Powered by Jawbone, or.. Does Ubuntu have better driver support than Windows? Cancel reply