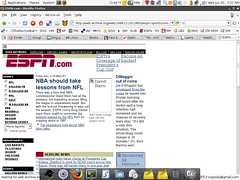 ESPN.com Snapshot from the Wayback Machine

Give Mitch Kapor credit: in his afternoon keynote at last Friday’s MIT/IBM Virtual World’s conference, he didn’t duck the critics. Either of virtual worlds generally, or the venue he has an investor’s interest in, Second Life. He did take the opportunity to remind the assembled audience of other inventions that were initially perceived to be of limited value – the internet and the PC among them – but didn’t try and deny that there are substantial limitations to today’s virtual worlds.

As the day unfolded, featuring the usual variety of presentations and panels, I thought back to my own introduction to the good old interweb. For months, I carried around a smeared, ink stained scrap of yellow legal paper with a 15+ character string on it: the URI for ESPN’s initial foray onto the web, ESPN Sportszone. Which looked even more primitive than what you see at the right. That was more or less the extent of my knowledge of the web; a single non-interactive, poorly rendered website rife with dead end links and broken images. My navigation for the web was that scrap of paper – not Google, not Yahoo. An experience, then, which is probably comparable to the primitive mechanisms we use today to interact with virtual worlds.

Have I been converted, then, like Saul on the road to Damascus? Am I about to try and persuade the non-believers of the one, true path towards enlightenment: virtual worlds? Hardly. Like any true Stephenson fan, of course, I’m intrigued by the potential, but the reality – as far as I can tell – has a long ways to go. For all that I was once addicted to the limited virtual world that was Team Fortress, my brief forays into Second Life have left me unimpressed – though I’m looking forward to a tour from Andy at some point.

More than that, I have reasons to not only be skeptical, but actively concerned about the potential risks that they pose.

A month or two back, a friend of mine asked over a beer if I’d ever heard of this “thing called Second Life”. After I allowed that yes, I had indeed heard of it, he asked for my opinion of the technology. Curious, I asked why. The answer was not what I had expected: a friend of his, once the owner of a small business, had sold it and was apparently spending the bulk of his free time in-world DJing. His friends, I was told, were growing concerned.

My family, for that matter, had its own near miss with virtual world disaster. As some of you know, a World of Warcraft ‘friendship’ nearly led to disaster for a young cousin of mine. I remain convinced that the happy ending to that story is due only to a massive and immediate reaction on the part of our family which brought the necessary pressure to bear on law enforcement representatives.

That virtual worlds are more than a game to many, then, is a fact I’ve certainly learned the hard way. What I had not properly understood, however, prior to Friday’s MIT/IBM Conference was just how unbelievably complex the technology is, both in and of itself, as well as in its wider implications.

Consider, if you will, the sheer economics. Second Life now has its own economy, one whose currency like any “real” currency is backed by real money rather than the Monopoly kind. Second Life residents are not compensated in chits, tokens, or beads, but cash. There are some folks for whom Second Life is their primary source of income – much like eBay is for a great many PowerSellers. Charles River Venture’s Susan Wu, in fact, just announced the inaugural Virtual Goods Summit.

An economy alone, however, is not by itself a guarantee of long term, sustainable relevance. There have been a great many games over the years that have generated tangible worth that proved transitive in the end. And right now, some corporate marketers see less than no value in Second Life as a marketing channel.

One gets the impression, however, that virtual worlds – provided they can address in some fashion the immensely complex problems posed by interoperability, security (one questioner claimed that organized crime now has a presence in Second Life – who knew?) and cultural divides, will have more staying power. The primary evidence of this, in my mind, is the level of corporate interest. Sitting to my immediate left at lunch, for example, were representatives from Harley Davidson. While they have yet to make investments in virtual worlds, they’re following with interest the activities of their customers who have created everything from virtual bikes to virtual tattoos. Ditto for Scion, a division of Toyota, who sees in Second Life a golden opportunity to engage with their target demographic – twenty and thirty somethings – and is making “6 figure” investments in the platform.

Last, but certainly not least, there’s IBM – long considered a technology king maker. Their investments? Well, they lent their name to this particular conference. And anyone who attended the Rational Conference last week can describe in detail the massive presence Second Life had there – it was everywhere. As part of their efforts on the day, they cranked out a nice video (which, interestingly, featured a track from Jessy Moss – an artist not too many folks have heard stateside), several panelists and presenters, and an excellent demo of some climate science related virtual world technologies.

Make no mistake, however: the technical limitations on both the server and client sides are daunting. As Kapor noted, the ready availability of fast PC’s with fast connections in the Participation Age gives virtual worlds the critical mass they need for the early adopters. Crossing the chasm, however, will take time.

Last Friday didn’t convince me that virtual worlds have done so, but it did make me more optimistic that they may – possibly in the not too distant future. For that reason alone, one or more of us at RedMonk will probably be spending more time covering the subjects going forward.