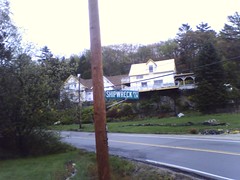 Way out west on the Mass Pike, around Lee, somewhere after three in the morning, your options begin to dwindle. First off, the Mass Pike has precious few of those little blue roadside signs with hotel/motel logos on them. Second, by the time you check in and get settled, it’s probably going to be close to four, meaning that you’ll get a couple of hours sleep, tops, before you have to get moving again. And lastly, it’s almost four, so to put things bluntly, “what’s the point, you’re already up?”

My own answer to that came in the form of a purchase at a Shell station where I-290 meets I-495 (tough to find 24 hour gas stations in that stretch, and I was close to empty): one Fiji water (I know, I know, but they’re so good), one Snapple Iced Tea (more for taste: caffeine really doesn’t really do much for me), and one Red Bull (quite possibly the most awful liquid on the planet).

These were bought not because I was particularly tired – not to worry, there was never any nodding, drifting, weaving or whatever – but as a precautionary measure. Like a life jacket, they were something I’d prefer to have and not need than need and not have. Unsurprisingly, I ended up not needing them. Finally, my insomnia was working for me rather than against me.

So while the plan as of midnight was to get a hotel room somewhere in Western Mass, eventually I came to the conclusion that I had enough left to push through the last few hundred miles and make it to Maine. And indeed I did. 20 or so hours after I left the parking lot of the Holiday Inn Express in Le Claire, IA, I turned up onto the gravel and clay mud of Shipwreck Lane, just as originally promised.

The journey that began at 11 AM Friday morning and concluded at 7 AM this morning was essentially this. I’d love to tell you that I did more before 6 AM then most people do all day, but honestly, driving a few hundred miles is far less of a chore than its made out to be. If you have an iPod or books on tape, anyway.

From the Western shores of the Mississippi to the Eastern shores of the Atlantic, the transition was far less eventful than you might expect, thanks to my faithful steed. Lots of idiots on the road (more on that later), and the car charger for the cell phone decided to prematurely retire, but it was pretty straightforward all things considered. Ok, there was a rather comical sequence where two other cars and I took a detour off I-90 around 2 AM only to have it bring us right back where we’d started (maybe you had to be there, but the sight of an elderly man shaking his thin fist at a bunch of roadsigns and earth movers at two in the morning struck me as hysterical), but there were no impoundings, no tickets (speeding or otherwise), and no major traffic apart from some congestion in Chicago, Cleveland, and Buffalo.

I’m thankful, of course, that I made it safely, and I’m also appreciative of Volvo for selling me such a fine automobile and my friends for putting up with the calls and text messages (if you thought my Twitter stream was bad, you’re ecstatic to not be one of them). I’m less thankful for gas prices that neared four bucks a gallon, the positively unholy stench of Ogallalla’s feedlots, some of the aforementioned drivers, and – of course – Chicago’s traffic and construction.

My one task today, visiting BFC Marine about the boat, is now out of the way (it should hopefully be in the water next Friday or Saturday), so the rest of today’s schedule involves sleep, some catch up time w/ Az, and – depending on schedules – a quick hop to Boston for dinner. Then tomorrow afternoon I’m off to San Francisco for Microsoft’s pre-OSBC event (no, I am not boycotting as some have requested that I do). More on all of that later, and I’ll be resuming regular programming (i.e. non boring travel monologues) shortly.

Oh, and if anyone’s interested, I’ll post the On-the-Go playlist I used on the iPod (my usual playlists are hideously aged at this point).