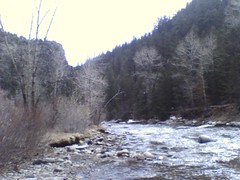 From such inauspicious beginnings, it seemed unreasonable to expect much of the day, in spite the expectations I’d burdened it with, but Saturday ended up – against all odds – as a most enjoyable day. Not, perhaps, quite what I expected, but enjoyable nonetheless.

The first problem raised its furry little head at sometime in the wee hours of Saturday morning, when the resident feline decided it would be fun to play flying squirrel and leap from either the dresser or beside table onto my sleeping chest. Being the landing pad for such a jump at 3 in the morning has a way of getting your adrenaline going, and as it turns out, adrenaline’s not all the conducive to a quick return to sleep. The only guarantee I had then for Saturday was that, at the very least, I’d be tired.

The second problem was one of venue. Rather than head up to the nearby Sawhill Ponds for the Saturday morning fishing trip, as per my recommendation, a friend and I drove out I-70, turning onto Highway 40 towards Granby and Winter Park en route to Berthoud Falls at the base of the valley pre-switchbacks. The good news was that snow melt had not yet turned Clear Creek into a raging, unfishable torrent. The bad news was that that was because very little snow had actually melted, meaning that any fishing of the rare exposed pools would have to be done from snowshoe. And did I mention the high winds? Yeah, they were great.

Unwilling to accept defeat so readily, we followed Clear Creek south, trying to find acceptable spots all the way from Georgetown to Idaho Springs. Nothing doing. So back to I-70 it was, and from there we got off on 6th and found a couple of spots in Golden that were more navigable. So we set to work, cranking out the rods and reels.

To make a long story short, we caught nothing. We tried streamers, hoppers, nymphs, caddis – pretty much everything you can think of. De nada. I threw everything in the Orvis fly case my brother got for me for Christmas at the lazy fish; still no joy.

The third problem was traffic. En route back to Denver from Golden, we made the ill considered decision to take I-25 back into town, rather than the further out Federal Blvd. Normally, this is the right decision. On days where the St Patrick’s Day parade is in progress downtown, however, it’s not only the wrong decision, it’s spectacularly wrong. So we sat unmoving on Park Ave, within sight of my place, for a good 45 minutes, thereby blowing the schedule for lunch.

Things began looking up from there, however. After dropping my friend off so he could make an afternoon appointment with an accountant, I drove back to my place, in order to rid myself of the not-terribly-practical-on-this-day car. From there I set about procuring lunch, wandering around downtown a bit, watching Jonathan Papelbon’s start against the Reds, and catching up on a quick nap. All good.

Thus refreshed, my friend and I met back up and headed over to Cap City where we had a few beers and I subsequently met up with a couple of other friends. After an evening of beers, college basketball and a trip crosstown, I headed for home.

Downtown was absolute mayhem; huge crowds (not Southie huge, but huge nonetheless) of tipsy people spilling out into the pleasantly cool night air, there to stumble or be carried fireman-style (seriously, first time I’ve seen that) home. True to Denver form, however, the crowds were pleasant and entirely unaggressive. The mobs of folks milling around were quite reasonable as I passed them by, as has not always been the case in some of the other cities I’ve lived in.

So all in all, I’m marking it as another good St Patrick’s Day in the books. Not, obviously, because of any special events, but rather the folks I got to spend it with. Now, it’s back to work.