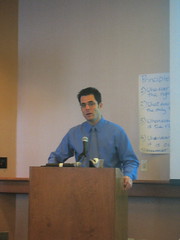 Today’s been a bit of a lost day, not just because of the fact that my flight didn’t get in until midnight, but also due to the fact that I-70 was shut down as of Quebec St. For the non-Denver readers, that’s bad news. Bad as in I spent another 45 minutes driving around Western Denver trying to figure out how to get home.

Anyhow, while the half-completed post on mashup licensing and commercialization will have to wait, I wanted to do what John Herren was thoughtful enough to do at the close of Mashup Camp: publicly thank David Berlind, and his absent but missed colleague, Doug Gold (my best to Doug in his recovery – look forward to seeing you at Mashup Camp IV).

That duo has put together what’s not only my favorite conference but potentially one of the most important as well. No one knew how Mashup Camp would fare when first begun, but it’s carved itself a nice little space within an already (over)crowded conference circuit.

The barriers to entry are minimal – mainly facility size limits and simple geography (the world might be flat, but it’s not that flat). David and Doug – to their credit – have kept the conference free with assistance of some forward thinking corporate sponsors, and as a result it’s consistently the most productive and interactive conference that I attend. Bar none.

And while David is quick to defer credit to the attendees, which is understandable given that they create and run the agenda, the fact is that without David and Doug there is no Mashup Camp. So I’m very grateful.

I’m also pleased to have voted – finally [1] – for the winner of Best Mashup. While I was politicking heavily on Anthony‘s behalf because I’m a big, big fan of the Hype Machine [2], the truth is that his application needed no assistance in winning the title.

Kudos, then, to Anthony, but more importantly thank you to David and Doug. Very much look forward to future iterations, whether they’re in Boston (my preference), or back on the West Coast.

Credits: thanks to Chris Radcliff for use of his photo.

[1] For the inaugual Mashup Camp, I voted for Adrian’s outstanding chicagocrime.org, which placed second to Taylor McKnight’s admittedly very cool podbop. Mashup Camp 2’s vote went to pubwalk, which lost out to a competitor I’ve forgotten.

[2] If you look closely at any of the browser screenshots I post, in fact, you’ll see an HM link in the del.icio.us powered Firefox toolbar – that’s Hype Machine. Truth be known, however, I usually hit the Hype Machine via another favorite of mine, Yubnub. A simple yn hype beirut on the browser address line, and I’m off and running.