This iteration of the RedMonk Programming Language Rankings is brought to you by Rogue Wave Software. It’s hard to be a know-it-all. With our purpose-built tools, we know a lot about polyglot. Let us show you how to be a language genius, click here.

It’s been a very busy start to the year at RedMonk, so we’re a few weeks behind in the release of our bi-annual programming language rankings. The data was dutifully collected at the start of the year, but we’re only now getting around to the the analysis portion. We have changed the actual process very little since Drew Conway and John Myles White’s original work late in 2010. The basic concept is simple: we periodically compare the performance of programming languages relative to one another on GitHub and Stack Overflow. The idea is not to offer a statistically valid representation of current usage, but rather to correlate language discussion (Stack Overflow) and usage (GitHub) in an effort to extract insights into potential future adoption trends. 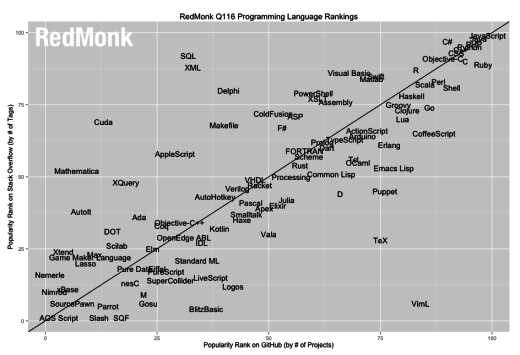 JavaScript’s continued strength is impressive, as is Java’s steady, robust performance. The long time presence of these two languages in particular atop our rankings is no coincidence; instead it reflects an increasing willingness to employ a best-tool-for-the-job approach, even within the most conservative of enterprises. In many cases, Java and JavaScript are leveraged side-by-side in the same application, depending on its particular needs.

Just as JavaScript and Java’s positions have remained unchanged, the rest of the Top 10 has remained similarly static. This has become the expectation rather than a surprise. As with businesses, the larger a language becomes, the more difficult it is to outperform from a growth perspective. This suggests that what changes we’ll see in the Top 10 will be slow and longer term, that fragmentation has begun to slow. The two most obvious candidates for a Top 10 ranking at this point appear to be Go and Swift, but they have their work cut out for them before they get there.

Outside of the Top 10, however, here are some of the more notable performers.

We are regularly asked why we don’t run the language rankings more regularly – every quarter or even on a monthly basis. The answer is that there isn’t enough movement in the data to justify it; programming languages are popular enough and the switching costs are sufficient to mean that significantly shifting adoption is a slow, gradual process. For every language language except Swift, anyway.

It will be interesting to see whether or not we’ll see new entrants into the Tier 1 of languages, with the most likely candidate at this point being Swift followed by Go. Further down the list, several interesting but currently niche languages are getting close to thresholds at which they have the potential to see substantial, if not guaranteed growth. Not the kind that will take them into the Top 10, but certainly there are vulnerable languages at the back end of the Top 20. In the meantime, we’ll keep checking in every other quarter to report back on progress – or the lack thereof – in any of the above areas.

Of all the requests we receive around our programming language rankings, the ability to browse the history of their performance is by far the most common. The current rank of a language is of great interest, of course, but for many previous rankings and the trajectory they imply are at least as interesting, and in some cases more so.

We’ve been thinking about this for a while, and while a number of different visualizations were assessed, there are so many different angles to the data a one size fits all approach was less than ideal. Which led to the evaluation a few dynamic alternatives, which were interesting but had some issues. Rather than hold up this quarter’s already delayed release for a visualization that had potential but might not work, then, we went ahead and published the rankings.

Over the weekend, however, the last major obstacles were addressed. It’s not perfect, but the historical depiction of the rankings is in a state where we can at least share a preliminary release. A few notes: