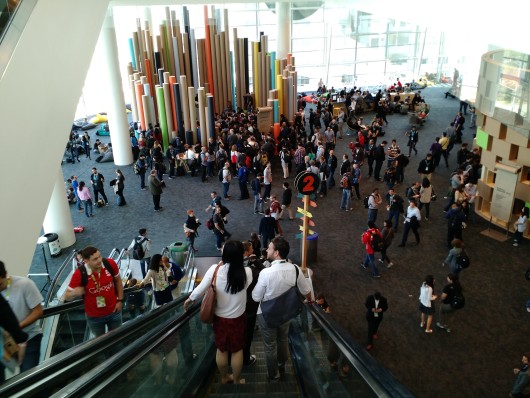 There were other technologies discussed at Google I/O this week, but more so than in years past this was an Android show. So much so that even non-Android projects were either a derivative of Android (Brillo), impacted Android applications (Chrome Custom Tabs) or run on top of the mobile operating system (Photos). Which tells us that Google, like the rest of the industry, believes that this is a mobile world, and we’re just living in it. Which is neither news nor interesting. What is worth noting is precisely how Google is attacking this market.

Back in November of 2012, one of the original iPad engineers made the argument that Google was getting better at design faster than Apple was improving its web service capabilities. Setting aside the often subjective question of design, this year’s I/O made it clear that Google is doubling down on services.

Consider that the theme for the forthcoming Android M release is user experience and usability. To that end, Google has made some useful changes to the stock Android interface, from the way privacy settings are handled to the volume sliders. But the real leaps in user experience are not going to come from the interface, but rather the services it connects to. If it seems counterintuitive that something like machine learning could positively impact user experience, you haven’t been paying attention.

The various digital assistants – Cortana, Siri and, well, Ok Google – suggest that the best mobile user interface may be the one that can be bypassed most effectively. To accomplish this trick, of course, you need two types of data. Bulk telemetry to train the algorithms for tasks like speech recognition, and contextual data to let a given user’s habits and preferences inform a platform’s interactions with them.

Google explicitly acknowledged this at the show when discussing its voice recognition error rate, down to 8% from 23% in less than two years. But it was also implicit in the most important service announced, Google Now On Tap. Announced in 2012, Now – which was reportedly a 20% time project originally – was Google’s first attempt to proactively leverage available contextual data on the Android platform. It knows where you live, and will alert you unsolicited about traffic backups on your commute home from the office. It will keep you up to date on the scores of your favorite teams, tell you when to leave for the airport to catch your flight and attempt to pick out links to content you’ll find interesting. All of which is useful if you visit the standalone Google Now launcher page.

What Google has done with Now On Tap is extend the reach of Now’s contextual data and understanding into any application on the phone. If you’re reading email and don’t understand a reference, Now will explain it to you. If you get a text from your spouse reminding you to do something, it will be there to create a reminder for you. And so on.

Now On Tap is important for two reasons. Most obviously, it’s potentially a big productivity win for users because instead of shifting context from a given app to look something up on Wikipedia or create a reminder, they’ll be able to do so without going anywhere. While Now On Tap is important for users, however, it’s a potential gold mine for Google. Previously, Google’s contextual awareness was limited to the applications it directly managed: it learned from your search history, it mined your Gmail Inbox and so on. With On Tap, Google stands to gain an important new channel into behaviors and actions previously opaque to it, specifically your interactions with third party applications.

None of this is even possible, of course, without deep investment in machine learning and proto-artificial intelligence. Google Photos, for example, ingested the archive from my phone, which includes dozens of photographed receipts for Expensify. There are no tags applied to these images, no categorization or labels – the word “receipts” is entirely absent from them, in fact. But when I query Google Photos, it’s intelligent enough to return pages and pages of nothing but receipts. This is, in computer science terms, dark magic. And it is this dark magic that Google has clearly identified as its differentiator in mobile moving forward.

Which is why one decision of Google’s in the mobile arena is so perplexing: its complete lack of a messaging strategy. The market has accorded messaging a high degree of importance. WhatsApp – conspicuously featured on stage at I/O – was valued at $19 billion. Slack more than doubled its valuation over a six month period to almost $3 billion. And iMessage is so much a part of the iPhone experience that discrimination against so-called “green bubble” users – i.e. anyone without an iPhone – is a thing.

What is Google’s response to this surge in messaging client importance? Crickets. The Android Hangouts client attempts to converge Google Talk-style IM and SMS in one place, but is extraordinarily awkward to use, because it does not, in fact, converge them. Google Voice, meanwhile, was at one point a credible SMS and voice service, but appears to have been effectively orphaned. Asked about this at Google I/O, the official response was “we have nothing to announce at this time.” For a conference that was first about Android and second about improving the user experience for the platform, then, the lack of any news or roadmap about what Google’s messaging strategy will be was baffling. Maybe Google can satisfy its back-end telemetry needs by introspecting a variety of clients from TenCent to WhatsApp via Google Now On Tap, but the users are left without a service comparable to what Apple, Facebook or a variety of third party platforms offer.

The odd lack of messaging news notwithstanding, however, I/O has been an impressive, if subtle, look at Google’s ability to put information to work at scale to deliver services sufficiently advanced so as to be indistinguishable from magic. Google may or may not ever match Apple’s design prowess, and the show may have lacked the surprise “One More Thing,” but the company is second to none when building the kinds of artificially intelligent services users will increasingly come to rely on. If it accomplished nothing else, then, I/O was a useful reminder of that fact.