Founded in 1998, VMware went public on August 14, 2007. Founded a year after VMware in 1999, Salesforce.com held its initial public offering three years earlier on June 23, 2004. From a temporal standpoint, then, the two companies are peers. Which is one reason that it’s interesting to examine how they have performed to date, and how they might perform moving forward.

Another is the fact that they represent, at least for now, radically different approaches to the market. VMware, of course, is the dominant player in virtualization and markets adjacent to that space. Where Microsoft built its enormous value in part by selling licenses to the operating system upon which workloads of all shapes and sizes were run, VMware’s revenue has been driven primarily by the sales of software that makes operating systems like Windows virtual.

Salesforce.com, on the other hand, has been since its inception the canonical example for what eventually came to be known as Software-as-a-Service, the sale of software centrally hosted and consumed via a browser. Not only is Salesforce.com’s software – or service, as they might prefer it be referred to – consumed very differently than software from VMware, the licensing and revenue model of services-based offerings is quite distinct from the traditional perpetual license business.

It has been argued in this space many times previously (see here, for example) that the perpetual license model that has dominated the industry for decades is increasingly under pressure from a number of challengers ranging from open source competition to software sold, as in the case of Salesforce.com, as a service. In spite of the economic challenge inherent to running a business where your revenue is realized over a long period of time that competes with those that get all of their money up front, the bet here is that the latter model will increasingly give way to the former.

Which is why it’s interesting, and perhaps informative, to examine the relative performance, and market valuation, of two peers that have taken very different approaches. What does the market believe about the two models, and what does their performance tell us if anything?

It is necessary to acknowledge before continuing that in addition to the difference in terms of model, Salesforce and VMware are not peers from a categorical standpoint. The former is primary an applications vendor, its investments in platforms such as Force.com or Heroku notwithstanding, while the latter is an infrastructure player, in spite of its dalliances with application plays such as Zimbra. While the comparison is hardly apples to apples, therefore, it is nevertheless instructive in that both vendors compete for a percentage of organizational IT spend. But keep that distinction in mind regardless.

As for the most basic metric, market capitalization, VMware is currently worth more than Salesforce: $42 billion to $35 billion as I write this. Even the most cursory examination of some basic financial metrics will explain why. Since it began reporting in 2003, Salesforce.com has on a net basis lost just over $350 million. VMware, for its part, has generated a net profit of almost $4 billion.

If we examine the quarterly gross profit margins of the two entities over time, these numbers make sense. 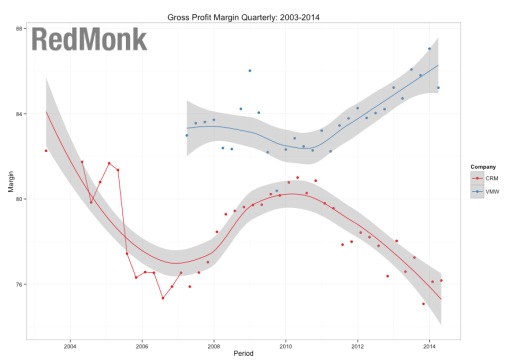 Apart from some initially comparable margins for Salesforce, VMware has consistently commanded a higher margin than its SaaS-based counterpart. While this chart likely won’t surprise anyone who’s tracked the markets broadly or the companies specifically, however, it’s interesting to note the fork in the 2010-2011 timeframe. Through 2010, the margins appeared to be on a path to converge; after, they diverged aggressively. Nor is this the only metric in which this pattern is visible.

We see the same trajectories in a plot of the quarterly net income, for example, but this is to be expected since this is in part a function of the profit generated. 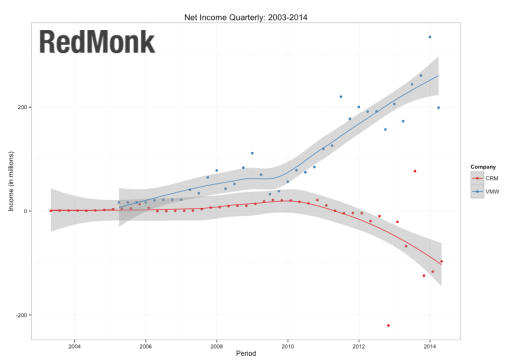 The question is what changed in the 2010 timeframe, and one answer appears to be investments in scale. The following chart depicts the gross property, plant and equipment charges for both firms over the same timeframe. 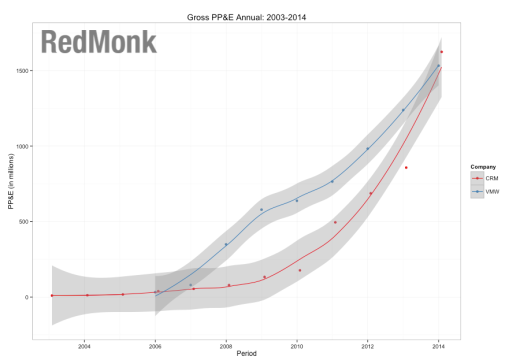 Notice in particular the sharp spike beginning in 2010-2011 for Salesforce. After six years as a public entity, the company began investing in earnest, which undoubtedly had consequences partially reflected in the charts above. VMware’s expenditures here are interesting for their part, because the conventional wisdom is that it is the services firms like Salesforce, Amazon, Google or increasingly Microsoft whose PP&E will reflect their necessary investments in the infrastructure to deliver services at scale. Granted, VMware’s vCloud Hybrid Service is intended to serve as a public infrastructure offering, but this was intended to be an “an asset-light model” which presumably would not have commanded the same infrastructure investments. Nevertheless, VMware outpaced Salesforce until 2014.

The question, whether it’s from the perspective of an analyst or an investor, is what the returns have been on this dramatic increase in spending. Obviously in Salesforce’s case, its capital investments have dragged down its income and margins, while VMware’s dominant market position has allowed it to not only sustain its pricing but grow its profitability. But what about revenue growth?

One of the strongest arguments in favor of SaaS products is convenience; it’s far less complicated to sign up to a service hosted externally than it is to build and host your own. If convenience is indeed a driver for adoption, greater revenue growth is one potential outcome: if it’s easier to buy, it will be bought more. This is, in fact, a necessity for Salesforce: if you’re going to trade losses now for growth, you need the growth. To some extent, this is what we see when we compare the two companies.

The initial decline from 70+ percent growth for both companies is likely the inevitable product of simple math: the more you make, the harder it is to grow. While we can discount the first half of this chart, the second half is intriguing in that it is a reversal of the pattern we have seen above. While VMware solidly outperformed Salesforce at a growing rate in profit and income, Salesforce, beginning about a year after its PP&E investments picked up, has grown its revenue at a higher rate than has VMware. Early in this period you could argue the rate differential was a function of revenue disparities, but the delta between the revenue numbers last quarter was less than 10%.

In general, none of these results should be surprising. VMware has successfully capitalized on a dominant position in a valuable market and the financial results demonstrate that. Salesforce, as investors appear to have recognized, is clearly trading short term losses against the longer term return. While there is some evidence to suggest that Salesforce’s strategy is beginning to see results, and VMware is probably paying closer attention to its overall ability to grow revenue, it’s still very early days. It’s equally possible that one or both are poor representatives for their respective approach. It will be interesting to monitor these numbers over time, however, to try and test how the two models continue to perform versus one another.