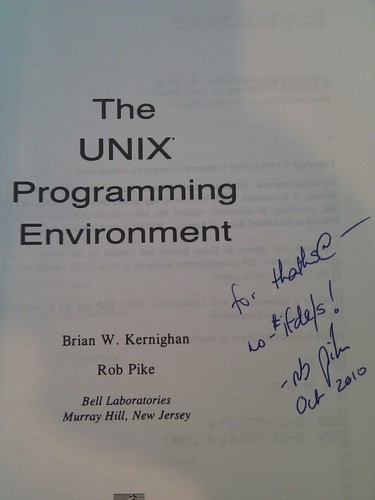 “Even though the UNIX system introduces a number of innovative programs and techniques, no single program or idea makes it work well. Instead, what makes it effective is the approach to programming, a philosophy of using the computer. Although that philosophy can’t be written down in a single sentence, at its heart is the idea that the power of a system comes more from the relationships among programs than from the programs themselves. Many UNIX programs do quite trivial things in isolation, but, combined with other programs, become general and useful tools.”
– The UNIX Programming Environment, Brian Kernighan and Rob Pike

“Is the ‘all in one’ story compelling or should we separate out a [redacted] LOB?” is a question we fielded from a RedMonk client this week, and it’s an increasingly common inquiry topic. For years, functional accretion – in which feature after feature is layered upon a basic application foundation – has been the norm. The advantage to this “all in one” approach is that buyers need only to make one decision, and refer to one seller for support. This simple choice, of course, has a cost: the jack of all trades is the master of none.

At RedMonk, we have been arguing for many years that the developer has evolved from virtual serf to de facto kingmaker. Accepting that, at least for the sake of argument, it is worth asking whether one of the unintended consequences of this transition may be a return to Unix-style philosophies.

The most obvious example of this in the enterprise market today is so-called microservices. Much like Unix programs, many services by themselves are trivial in isolation, but leveraged in concert can be tremendously powerful tools. This demands, of course, an Amazon-level commitment to services, such that every facet of a given infrastructure may be consumed independently and on demand – and this level of commitment is rare. But with even large incumbents increasingly focused on making their existing software portfolios available as services, the trend towards services broadly is real and clearly sustainable.

The trend towards microservices, which are much more granular in nature, is more recent and thus more difficult to project longer term (particularly given some of the costs), but certainly exploding in popularity. Sessions like Adrian Cockroft’s “Migrating to Microservices” are regularly standing room only with lines wrapping down two halls. The parallels between the Unix philosophy and microservices are obvious, in that both essentially are devoted to the idea of composable applications built from programs that do one thing well.

These types of services are difficult to sell to traditional IT buyers, who might not understand them well enough, would prefer to make a single decision or both. But developers understand the idea perfectly, and would prefer to choose a service that does what they need it to over one that may or may not do what they need but does ten things they don’t. It’s easy, then, to see microservices as the latest manifestation of the developer kingmaker.

It’s not as easy, however, to understand a similar trend in the consumer application space. In recent months, rather than continue trying to build a single application that serviced both file sharing and photo sharing needs, Dropbox split its application into the traditional Dropbox (Files) and the newly launched Carousel (Photos). Foursquare today released an application called Swarm, which essentially forks its business into two divisions: Foursquare, a Yelp competitor, and Swarm, a geo-based social network. Facebook, meanwhile, ripped out the messaging component of its core application in April because, as Mark Zuckerberg described it:

The reason why we’re doing that is we found that having it as a second-class thing inside the Facebook app makes it so there’s more friction to replying to messages, so we would rather have people be using a more focused experience for that.

Like enterprise tech, consumer technology has been trending towards all-in-one for sometime as pieces like the “Surprisingly Long List of Everything Smartphones Replaced” highlight. But if Facebook, Foursquare and Twitter are any indication, it may be that a Unix philosophy renaissance is underway in the consumer space as well, even if the causative factors aren’t as obvious.

All of which means that our answer to the opening question should come as no surprise: we advised our client to separate out a new line of business. Particularly when developers are involved, it remains more effective to offer products that do one thing well, however trivial. As long as the Unix-ization of tech continues, you might consider doing the same.