Thanks to a combination of market factors, but principally increased competition, there is no technology market where prices are moving more quickly than cloud infrastructure. After completing an initial survey and deconstruction of IaaS pricing trends in August of last year, in fact, follow ups proved difficult because prices dropped so frequently that an analysis was frequently obsolete before it was even published. As was the case last week, when Google at once announced the General Availability of its Cloud Compute Engine (GCE) as well as significant price drops – the day after the original analysis had been re-run.

A week later with no corresponding price drops from competitive providers, the decision was made to publish this before the inevitable arrives. As a reminder, this analysis is intended not as a literal expression of cost per service; this is not, in other words, an attempt to estimate the actual component costs for compute, disk, and memory per provider. Such numbers would be speculative and unreliable, relying as they would on non-public information, but also of limited utility for users. Instead, this analysis compares base hourly instance costs against the individual service offerings. What this attempts to highlight is how providers may be attempting to differentiate by prioritizing memory over compute capacity, as one example. In other words, it’s an attempt to answer the question: for a given hourly cost, who’s offering the most compute, disk or memory?

As with the previous iteration, a link to the aggregated dataset is provided below, both for fact checking and to enable others to perform their own analyses, expand the scope of surveyed providers or both. 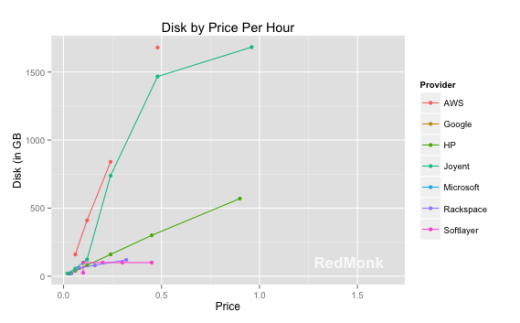 As mentioned, two of Amazon’s instances (which are EBS only) and all of Google and Microsoft’s are omitted from this chart because they do not include fixed disk price. That said, of the remaining providers, it’s interesting to see that Amazon remains the most aggressive in terms of the disk space made available. Even granting their economy-of-scale cost advantages versus some of the competitors here, with the cost of disk falling it’s interesting that no other players besides Joyent have been more willing to challenge Amazon on this front. Whether this signals a lack of ambition on the part of AWS competitors or a lack of interest from the market in disk versus memory and compute capacity is unclear, but it seems probable that it’s a combination of both.

If these charts are intended to expose prioritization from a feature perspective, meanwhile, the plot of memory capacity versus hourly cost is potentially the most revealing. 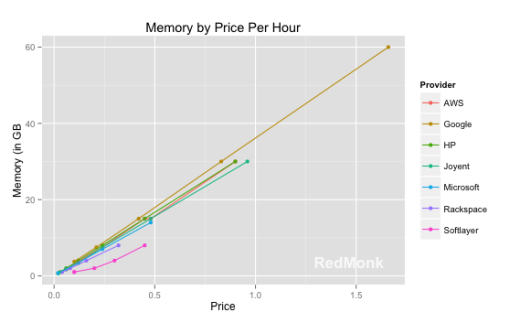 Lastly, we have a chart of the available compute units relative to the hourly cost.

Clearly signalling its intent to compete with AWS is HP, which matched its pricing on relative available memory costs and betters it in available compute units. Rackspace is more competitive within compute than memory, and AWS – though the dominant market player – is still among the most aggressive in terms of pricing per compute unit. Softlayer and Microsoft’s Azure form the middle of the pack, with Google conspicuously less competitive in terms of available compute units as a function of hourly cost. This is a marked shift from our prior analysis, which had Google among the leaders in terms of compute per hourly cost.

A few overall takeaways, with the reminder that this is merely a survey of standard instances:

In the next iteration of our cloud pricing research, we’ll explore how pricing has changed over time across the surveyed vendors collectively. In the meantime, here is a link to the dataset used in the above analysis.