Before proceeding, a few caveats.

With that said, here’s how the programming language framework charts work. As with our programming language rankings, StackOverflow’s tag volumes are used as the representative metric from that property. For each framework, the single most popular identified tag was used. For GitHub’s data, because there are no rankings available as with programming languages, the data here is based on the number of users “watching” a given project. This is used as a proxy for developer interest and engagement with a given framework. The sizing of the individual datapoints, meanwhile, is based on the total of GitHub watchers and StackOverflow tags for each project.

Using that process, we generate the following plot.

Notable on this chart are the outperformance of jQuery and Bootstrap on StackOverflow and GitHub, respectively. Bootstrap’s performance is likely due in part to its GitHub native status, but jQuery’s overwhelming popularity on StackOverflow reflects its standing within a variety of JavaScript development communities. Ruby on Rails, meanwhile, has a relatively balanced performance, demonstrating traction on both GitHub and StackOverflow. Node.js for its part sees less traction on StackOverflow than Django, but is four times more visible on GitHub. All in all, however, the presence of these extreme or outlying values obscures the performance of less popular frameworks.

If we remove the five outperforming frameworks in Bootstrap, Django, jQuery, Node and Rails, we get the following plot. 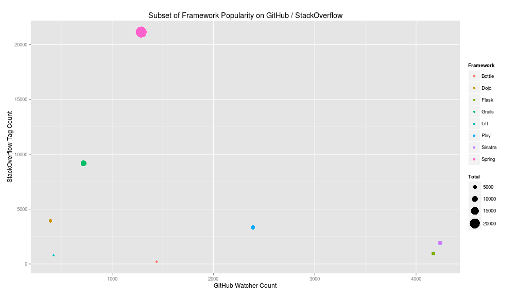 Within this subset, Spring’s strength on StackOverflow becomes apaprent, as do Flash and Sinatra’s popularity on GitHub. Play and Grails, meanwhile, show better than average traction on GitHub and StackOverflow, respectively. Beyond that, there’s little to differentiate Bottle, Dojo or Lift.

In terms of the data collected here, then, this is how the assessed frameworks rank in terms of their GitHub and StackOverflow counts:

Again, because we are generally comparing apples to oranges, little should be read into the above list, as the frameworks all have varying goals and intended markets. It is, however, interesting to see how they compare in broad terms with one another. And in certain cases where projects are directly competitive, such as with Dojo and jQuery, the numbers may be more meaningful.