For years now, it has been self-evident to us at RedMonk that programming language usage and adoption has been fragmenting at an accelerating rate [coverage]. As traditional barriers to technology procurement have eroded [coverage], developers have been empowered to leverage the runtimes they chose rather than those that were chosen for them. This has led to a sea change in the programming language landscape, with traditional language choices increasingly competing for attention with newer, more dynamic competitors.

The natural consequence of this tectonic shift has been uncertainty. Vendors for whom supporting Java and Microsoft based stacks was once sufficient are being forced to evaluate the array of alternatives in an effort to maximize their addressable audience. Platform-as-a-Service (PaaS) stacks like Cloud Foundry and OpenShift are perhaps the best example of this; the differentiation for each at launch was in part their support for multiple independent runtimes from JavaScript to Ruby.

While the question is obvious – which languages should I support? – the answer, and mechanisms for determining an answer, have been considerably less so. There is no canonical metric for determining platform traction; we employ half a dozen or more internally at RedMonk, depending on context, which incorporate everything from GitHub LOC rankings to LinkedIn group membership data.

But one of our favorites is the one originally developed by Drew Conway in 2010. It compares and contrasts the rankings of programming languages on GitHub and Stack Overflow to provide a broader view of language popularity. Our first snapshot using this model came in September. Five months later, we recompiled the data and plotted it to see what – if anything – had changed. Herewith the updated plot. 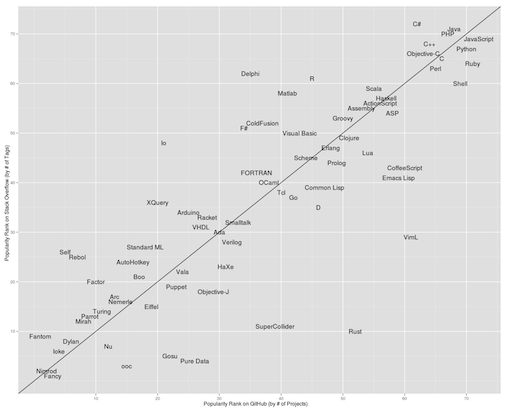 In general, the addition of languages like Dylan, Turing or Rust aside, little has changed six months on. We still have two clearly defined upper language tiers, with two to three less visible below that. There are, however, several developments worth discussing in more detail.