One of the advantages web based businesses have is that they are – in theory, at least – metric rich. Pageviews, visitors, time on site, popular pages: you’re not likely to be short of data. But this data is only of value if you can process it and draw meaningful conclusions.

Not a new category, by any means, vendors have had solutions in this area for well over a decade. What is new about the category is the accessibility of the tools, both in price and – occasionally – usability.

The acquisition of Urchin – née Web Depot – in 2005 has probably done the most to democratize enterprise grade web analytics, although there are hordes of alternatives available, from AWStats to Mint to Piwik to Statcounter to Webalizer to WebTrends.

Herewith a brief look at some of the tools we’re using, with notes on their respective strengths and weaknesses. 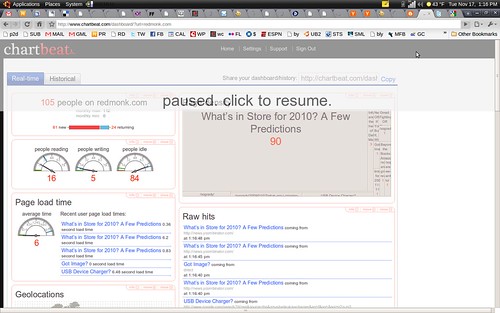 I discovered Chartbeat via Nat Friedman’s Twitter feed, and the setup was quick and easy. If Google Analytics is your website’s past, Chartbeat is its present. The hosted service is heavily oriented towards what is happening on your website right now – see Fred Wilson’s site, for example – which can be helpful during traffic spikes. It has some basic history, but nothing terribly extensive. The third party service integrations, like Twitter, are fairly basic.

The Good: The setup was pretty simple, and the real-time viewing and visualization of site activity are impressive. Likewise, the site is modern and visually attractive (if Flash heavy).
The Bad: Not really a standalone reporting offering, given the lack of history on specific posts and so on. Best used as a complement to other services.
Service Type: Hosted
Cost: Starts at $9.95/mo for 5 websites 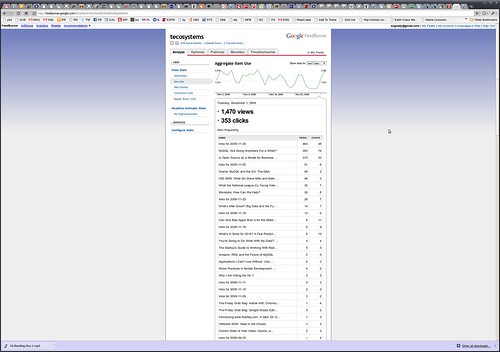 Best known for serving as a proxy for your feeds, the Google acquired Feedburner does offer some interesting web analytics capabilities. For those who, like us, serve up full text in their feeds, Feedburner will attempt to provide you with view metrics (which sadly are not yet integrated into Google Analytics). The good news is that Google Analytics and Feedburner have (finally) begun the process of integration, and the former can now tell when the latter has referred in a link. If you want to get metrics, then, on how your content is performing within aggregators as well as on the web, Feedburner is a good idea.

The Good: Excellent mechanism for acquiring intelligence on your feed consumption and relative popularity, reasonable history metrics on individual items.
The Bad: Though it was acquired by Google better than two years ago, Feedburner’s integration into other services – particularly in the account management space – is sorely lacking. Thus you have separate Feedburner and Google Analytics logins, Feedburner can’t support more than one login per account, and – most problematically – Feedburner’s metrics are still mostly opaque to Google Analytics, even if you use both.
Service Type: Hosted
Cost: Free 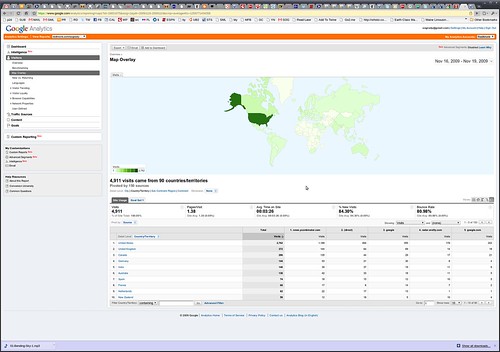 This is the biggie in the web analytics space, both because of its capabilities and the fact that it’s free. It is an enterprise grade analytics platform, and it shows in its interface which is geared towards campaigns, conversions and other activities likely to be less than relevant to small site proprietors. Google is taking steps to make the data less overwhelming lately, and its recently launched Intelligence beta is a step in the right direction. Basically it’s a service that will look for patterns from the vast amounts of data that Google Analytics tracks: traffic is more than expected today, time spent on the site is way down, referrals from Hacker News are way up and so on. The biggest challenge for Google Analytics still, however, is making it usable.

Two other observations: while it’s more so lately, it’s not a terribly real-time platform. You should not use it to find out what’s happening on your site right now, as you would a Chartbeat. It also, oddly, does not track visitor paths through a site, as far as I can tell. You can tell who visited, and what pages were visited, but it’s difficult to put together individual tracks. Which I think is weird.

The Good: Industrial strength platform, the Intelligence beta lowers the barriers to data analysis, unlimited site history, and – because it has an API – vibrant third party ecosystem (as we’ll see in a moment).
The Bad: Initial users are likely to suffer from analysis paralysis, as GA can be overwhelming in its presentation. The reporting still has its kinks: though it doesn’t tell you this, for example, you can’t add more than eight filters to a custom report (it will break). Minimal real-time capabilities, subpar map visualization and a notable lack of Visitor Path functionality.
Service Type: Hosted
Cost: Free 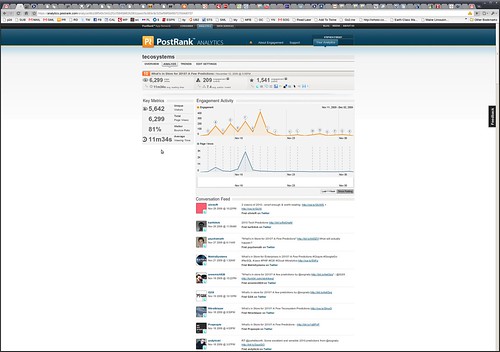 While the bulk of PostRank’s data is drawn from Google Analytics, it also seamlessly integrates BackType to marry social networking performance data (Twitter, del.icio.us mentions, etc) with Google Analytics metrics. The result is a powerful tool for understanding, in multiple dimensions, how your content is performing. What was begun as a service for consumers – to help them rank posts and better determine what’s worth their attention – has turned into an equally usable tool for publishers.

As described in this post on the official Google Analytics blog, the Juice Analytics guys have been busy putting the GA API to work. The result is hosted on Google App Engine here. 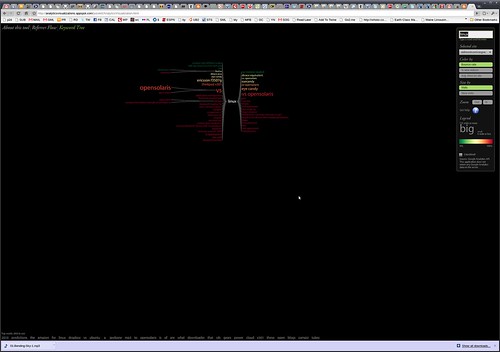 Keyword tree lets you see which of your Google Analytics search keywords are related, and how. It’s more of an eye candy visualization than something you’d use daily, but the patterns you can discover by playing with it are interesting. 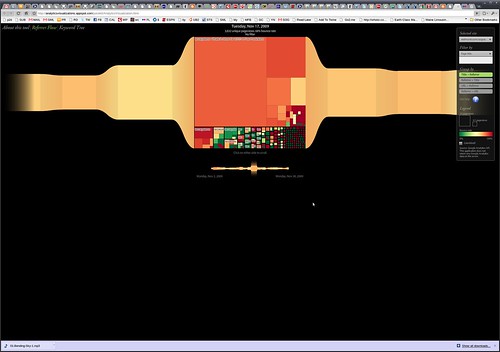 Referrer Flow is a simple visualization that indicates site traffic over time, and within that, individual entry performance. It’s a neat visualization that allows you to view overall perfomance quickly, but drill into specific time periods where you have questions. 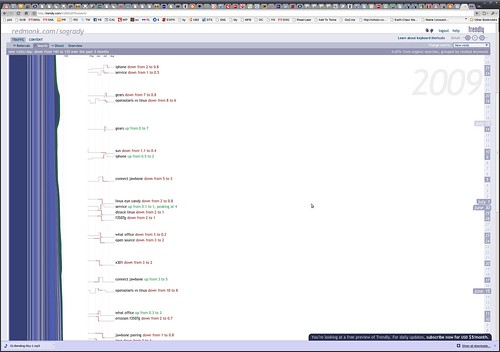 Not a product of the Juice Analytics guys, Trendly is instead the brainchild of the folks that brought you Dabble DB. It’s a very pretty, inherently visualized interface to Google Analytics data. The thesis – which I happen to agree with – is that Google Analytics, by virtue of its extensive data gathering capabilities, is noisy. Meaning difficult to extract signal from. Trendly aims to do that, visualizing for you changes in patterns, be that referrals, search terms, traffic and such. It’s a nice tool, if basic in its aims.

The Good: Trendly does a nice job, as the name suggests, of indentifying and presenting to you trends in your website traffic. Its UI is also reasonably capable of displaying history versus other tools, such as PostRank, which are more oriented towards the present.
The Bad: Trendly doesn’t integrate other metrics besides Google Analytics, the UI can lack polish (e.g. presenting URLs rather than article titles), and it can be a bit noisy itself.
Service Type: Hosted
Cost: $5/mo per Google Analytics site ID 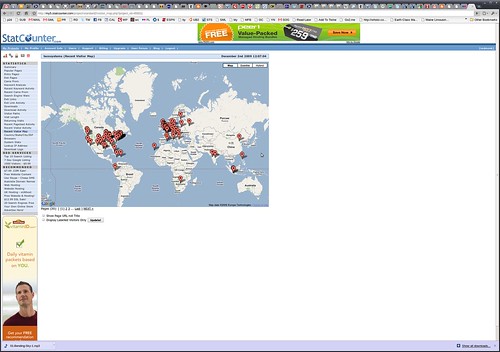 Statcounter, so the rumor goes, was started by Aodhan Cullen when he was 16. While its featurelist doesn’t compare with Google Analytics, it’s more usable for basic analytics and does include – as Google Analytics does not – visitor path tracking. Overall, it’s a nice, simple package for the collection of basic web analytics. While not as geared towards the present as Chartbeat, it does show you real-time performance as well as reasonable history. The IP resolution and hostname lookup is generally excellent, as well, giving you a good idea of where the readers of your content are coming from.

The Good: Simple interface doesn’t overwhelm users out of the box. It’s a jack of all trades, servicing both real-time and historical web analytics needs. Provides the simplest interface for understanding who’s visited your site, and for what purpose.
The Bad: Does little to identify trends or patterns, could use a UI refresh to bring it up to modern standards, advertising is presented even to paying users,
Service Type: Hosted
Cost: Free for 250,000 pageviews and 500 log entries, begins at $9/mo after

What Do I Want?

Like Alistair Croll, I’d love to have a more holistic view. Currently, I’m bouncing between various services for different metrics, all of which are imperfectly synthesized in my head.

Instead we have pageviews and all of the other metrics with which to draw imperfect conclusions. I expect this to be a temporary blindness, however: too many people want these kinds of answers for the questions to go unanswered for long. And if we can’t get the answers we need from someone else, we just might take matters into our own hands using tools like Hadoop and Pig.

What about you: how are you answering these questions? What are you using to answer them?

Leave a Reply to Podcast download numbers for How I Got My Job | Daniel Johnson, Jr. Cancel reply