Like Jeremy Zawodny, I’ve had persistent issues with Intel Video since the Jaunty release of Ubuntu. The short version is that the fancy effects that I eventually came to depend on stopped working after the Intrepid release of the distribution. Both Jaunty and Karmic include Intel video drivers – and I’ve tried every bleeding edge PPA version I can find – that simply don’t work with Compiz. For those of you running similar Intel video chipsets (my machine is a Thinkpad X301, which reports the hardware as: Intel Corporation Mobile 4 Series Chipset Integrated Graphics Controller), then, here are the current options for composited desktops on Ubuntu. 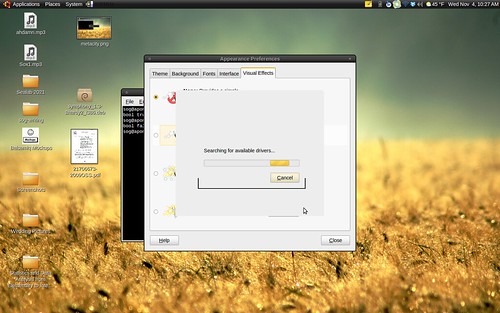 Normally, this can be easily activated by selecting System:Preferences:Appearance:Visual Effects:Normal/Extra. The Intel video drivers included with Jaunty and Karmic, however, include a regression which disables Compiz. What you’ll get is a dialog box that says “Searching for available drivers,” a refresh of the display, and no Compiz. As mentioned above, I’ve tried in the past to use the bleeding edge repositories for Intel drivers, but have not had success making Compiz work.

I lied: Compiz now works just fine. The solution? Reinstallation of the Compiz package and its assorted dependencies. I have no idea why this should work, but it worked for someone else and it worked for me. So right now, then, Compiz is your best option. 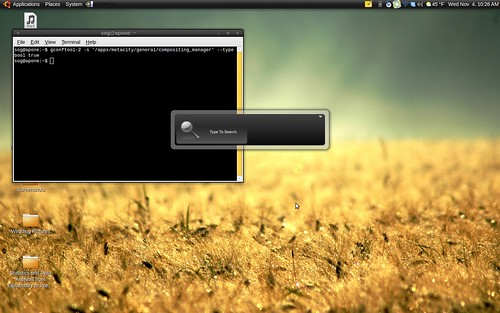 The good news is that composited Metacity – the software Compiz was intended to replace – works. The bad news is that it doesn’t work well. Effects can be enabled, as you can tell from the glassy and transparent panel of GNOME Do, pictured. But enabling them introducing a noticeable and unacceptable lag; ALT-TAB behavior includes a perceptible, unfortunate delay from command to window presence.

If you want to enable this, ensure that Compiz is turned off and execute: gconftool-2 -s '/apps/metacity/general/compositing_manager' --type bool true. And before you ask, yes, false will turn it off. 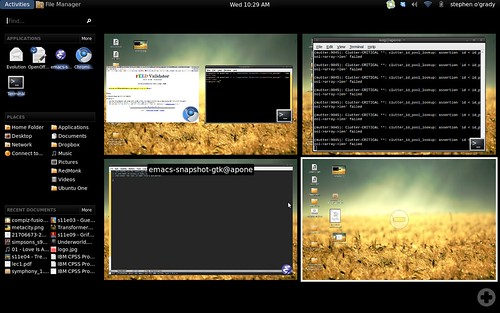 The most interesting of the three options, GNOME Shell is the project upon which the next iteration of the GNOME desktop – version 3 – will be based. While the developers are likely to push the release date out from March to September, you can easily build and test it out on your desktop now.

Like KDE 4, which was a substantial revamp of the previous version of that project, GNOME Shell is a fairly radical rethinking of the desktop paradigm. I like some features more than others – the application activation paradigm suffers greatly in comparison to the non-intrusive GNOME Do, in my opinion – but it’s certainly an attempt to push things forward.

The most interesting aspect of the project, from my perspective, is Mutter. Mutter is essentially Metacity with the Clutter technologies baked into it. As Joe Gregorio noted back at OSCON, Clutter’s a popular project these days, and for good reason. Built by the Intel-acquired OpenedHand team, among others, Clutter offers aesthetically pleasing, thoroughly modern graphics capabilities that, even better, are fast. Indeed, of the available compositing options for my hardware, the only one that performs adequately is the next generation option in the Clutter based GNOME Shell. That is most unusual; the bleeding edge stuff is typically very slow.

I’ll have more on Shell in future, but for now, just be aware that it may be – depending on your hardware – the only compositing option that works.