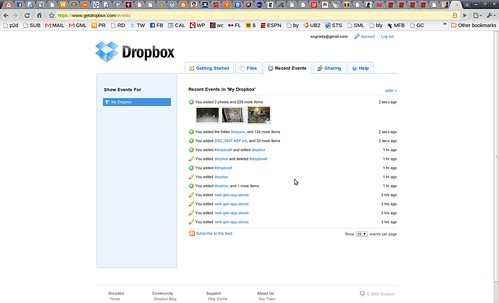 Assuming that people actually use it for piracy at all, which I personally haven’t seen. But hey, there are better than two million of us using the software these days, so statistically it’s probable that there are some bad apples.

For the rest of us, Dropbox is a drop dead simple, cross-platform application synchronization client. One that Just Works. Now, before you start, I know what you’re going to say. You’re about to say this:

For any advanced techie, the three main reasons (Backup, sync, sharing) for using DropBox are irrelevant. For ordinary users: sure! It sounds like a great solution.

I don’t think anyone with valuable data would trust their only backup with an external “in-the-cloud” source. On top of that, most people’s upload capacity is severely limited.

Syncing is accomplished with rsync or a network share on your home network. Most geeks will SSH into their home computers, etc. Sharing via drop box cannot be any better than a personally managed web server. GIT/SVN on your server offers much more than drop box can. On the other hand, maybe I just like to hack and get my hands dirty creating my own solutions.

To which I would reply just as JesseAldridge did:

Have you tried DropBox? The app is so damn easy to use it’s ridiculous. Sure there are other ways to do it, but the absolute lack of headaches makes Dropbox way better than those other techniques you suggested.

No hyperbole involved. Seriously. Dropbox is stupid easy. I still employ rsync and related tools for odd jobs here and there, but Dropbox is so low effort that I honestly have to justify not using it. You can replicate the functionality, but you’re not going to match the user experience, let alone the speed, on your own. Watching the changes you make on one machine instantly reflected on another with zero intervention on your part is magical, I assure you.

Of the three core services, I don’t really use sharing, so I can’t comment on that. I’m sure it’s useful. Dropbox’s backup and synchronization, on the other hand, are fundamental enablers of my day to day technology usage. First, the simple stuff.

Backup is probably the most straightforward use case for Dropbox. You can take files or directories and either drop them into your Dropbox folder, or create symlinks out to them from there. Here’s how to do that. Items that I back up – using the term loosely, as there’s no versioning, etc applied: my Ubuntu repositories list (etc/apt/sources.list), a list of the packages I have installed locally, the directory containing my writing, a subset of my music, my Tomboy notes, and more.

But to be honest, backup just isn’t that interesting. Lots of services can do that. What’s compelling about Dropbox, really, is the synchronization element.

This is where things get cool. If you’re wicked geeky, that is. It’s nice, of course, to have web based backups of your files: it was a godsend the last time I fatally damaged my .emacs file. But it’s nicer to have the various configuration files that make your desktop your desktop seamlessly pushed to every machine you use. Which, in my case, include a Windows 7 laptop, an Ubuntu laptop and workstation, a Mac Mini and an iPhone.

To explain what I mean, here’s how you create and share a .bash_aliases file with all of your bash equipped machines. The following, please note, assumes that you have a primary workstation and secondary machines, as I do.

Congrats, you’re done. What you did was create a single real .bash_aliases file that gets symlinked first into Dropbox and then into the ~/ directory on the target machine. In practical terms, it means that any aliases you create on the master will henceforth execute perfectly on the secondary machines.

I use this for my .emacs and the requisite *.els, my .fonts directory, my Tomboy notes, and with the failure of Weave I’m even contemplating doing it to my .mozilla directory. And when it comes time to purchase a new machine, Dropbox will be the grease that gets me moved in and up and running quickly.

Am I concerned, as some are, with security? Marginally. I don’t use it to store anything particularly sensitive, although I think that’s just common sense. The Dropbox folks have done a better job of late, I think, articulating just how they go about protecting your data.

Frankly, less of Dropbox. And I mean that in a good way. I’d love to see Dropbox baked directly into applications. Media players and photo managers would be logical first candidates, but how many applications would not benefit from fast, real-time file system awareness and synchronization?

Until then, however, I’m a very happy, paying customer of the service. It’s certainly come a long way from its days as a candidate for Y Combinator, and I wish it well in future.