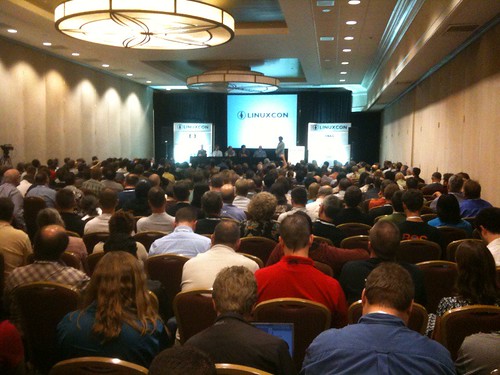 If you’ve been to enough of them, you know that conferences have very definite lifespans. The trajectories may vary according to variables like subject matter, economic conditions or the geographic location, but they’re all pretty much the same. Unfortunately for the organizers, the arc tends to look a lot more like a parabola than a triangle.

In the beginning, shows are generally the product of an interested commercial party, a group of enthusiasts with a shared interest, or some combination of both. The signal to noise ratio in the early days is high, if only because the only folks bothering to attend are, by definition, practitioners on some level. Get popular enough, however, and things change. For one, the marketers notice all those people in one place at one time, and begin injecting dollars (good) and asking for slots (less good). Soon, the cozy little venue that ensured that everyone you want to see is within fifty feet of you at any given time isn’t remotely big enough, and you’re walking a half mile to get from one session to another.

It’s around this time that the enthusiasts that started the show, that made it what it once was, stop going. And while the organizers rarely know it at the time, this is the beginning of the end: everything from here on out is basically a managed decline. Once it’s lost the core experts, the conference is irretrievably headed down the wrong side of the parabolic arc. Everything, as they say, is downhill from there. Except the cash, which will continue to pour in from vendors for whom it’s easier to pay the bills and send a skeleton crew than explain why they didn’t attend.

At this point, there are two choices: reboot the show entirely, going back to the beginning, or rebrand. Or both.

Which brings us, finally, to LinuxCon.

For all of its popularity – Linux is, after all, a multi, multi billion dollar industry at this point – it’s lacked a focused show. OSCON, the Linux Plumber’s conference and a variety of other distribution oriented and community run shows have picked up the slack, for the most part, but we haven’t had a practitioner focused event like LinuxCon for a while now. And while LinuxCon isn’t technically a reboot or rebranding of anything, it’s being seen that way. The show is starting small – between five and six hundred attending, I believe – and even were the economy not currently in the tank this would be the right decision. Because it keeps the emphasis right where it should be: on the content, not the swag. Even small, it’s still full: half the sessions I’ve been to have been standing room only.

In between meetings of the scheduled and hallway variety, the talks have been interesting and it’s difficult to imagine hearing some of them at a few other shows I could name. Perhaps more importantly, it’s an excuse to get back to fake Portland now that OSCON has bolted for the Valley.

I’ll get into what I’ve heard here later, but in the meantime, if you’re interested in Linux and its surrounding ecosystems, I’d keep LinuxCon on the short list of conferences to attend next time around. Who knows, after all, how long it has before it hits the other end of the parabola?