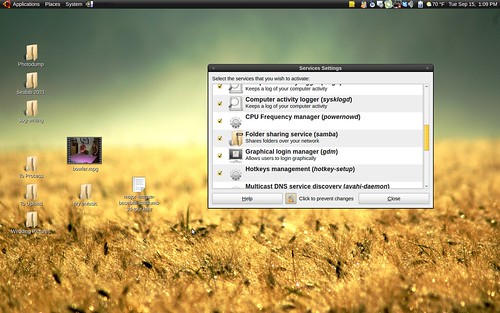 Buoyed by the success I reported running Karmic on an antiquated X40 (and this positive report), I decided to take the plunge this past weekend and upgrade – against the recommendations of many, given that a beta is still two weeks away – my production laptop, a Thinkpad X301, to an alpha version of Ubuntu’s forthcoming Karmic Koala release. While I would not encourage anyone to follow my example at this juncture, because I’m experiencing the typical growing pains of ever-changing, still alpha software, there is good news.

Herewith, a quick review of Karmic in its pre-release state.

Pretty much everything, happily. While it must be acknowledged that I did an in place upgrade rather than a fresh install, and thus am not subject to some of the more aggressive fundamental changes such as the default filesystem, the upgrade experience was relatively painless. With the exception of the bluetooth modules, which I have yet to test but are detected properly, all of the on board hardware is supported seamlessly and out of the box. Wifi, audio, suspend, the video hardware: all good, for the most part. Even the famously problematic on board Ericsson F3507g WWAN card is working for me as of the 2.6.31-10 kernel. Indeed, this post is coming to you via the magic of that function.

What Doesn’t Work (and How to Fix It)

With the caveat that many, if not most of these, are because I’m running alpha software, here are a couple of gotchas.

I’ve argued for a while now that one of Canonical’s primary contributions to the Linux distribution world is in the polish, the look and feel of the desktop. Karmic continues this tradition, with an attractive, aesthetically pleasing UI. While some of the decisions – the introduction of the Growl-like notification system, for example – have been controversial in some quarters, I find them to be welcome additions to a rapidly improving user experience.

To that same end, I’ve made two changes to my desktop in recent weeks that might be of interest to others running Ubuntu. First, I changed from the now-standard Dust theme to the more refined if unfortunately named “Wild Shine.” You can pick that and other newer eye candy themes from the PPA here. The other change I’ve made has been in the font department. For the first time since I started using Ubuntu I’ve strayed from the default Sans and Sans Mono fonts to the Red Hat authored Liberation Sans and Liberation Sans Mono fonts. A small change, to be sure, but one I’m happy with.

Ubuntu still is not, in my mind, a match for the top to bottom polish of an OS X, but the days of Linux desktops being boxy and unattractive – the old Volvo of the desktop world – are over, in my opinion. Those were the days.