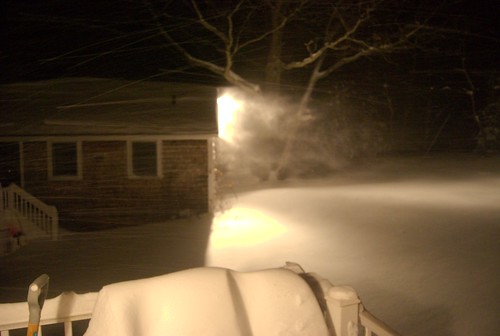 Technically, it was a Nor’easter, but who’s counting?

Like the rest of New England, we here in Maine got punished yesterday with a storm that got up at nineish and didn’t retire until well after midnight. Technically, I’m told it was not a blizzard, but that didn’t stop it from shattering a few December records. I’m not as cool as Senor Churbuck, however: I have no dramatic travel tales to tell. Anticipating unpleasantness, I hid the car in the garage Saturday night and didn’t even attempt an extraction until late this afternoon.

Wading through the drifts last night, during the storm’s peak, I understood at once how snow blindness works and why pictures of blizzards are rare: cameras aren’t big fans of heavy snow blown at 30 miles an hour. Even with expert advice, my efforts to capture nature’s best efforts photographically were…a miserable failure. You’ll just have to trust me that the snow was sideways.

This morning broke on a cold but clear(er) day, but sadly one that saw no plow action. But with the bridge on island scheduled to be moved tonight between 9 PM and 5 AM, waiting for it was not an option: I was out of both food and beer. Thus I cleared a fat layer of snow, turning this driveway into this driveway, calving it off one small ice shelf at a time. Though truth be told that wasn’t quite enough to get the car out; I had to clear another ten feet in order to make the turn to the street.

Which brings us to this moment, which happens to be one hour and fourteen minutes before they try to move this bridge fifty feet or so to the left. If they’re successful, I’ll be on my way to the airport en route to Jersey for the holiday. If they’re not, I’ll be rationing the cereal I bought tonight and praying I don’t have a medical emergency.

Either way, I’ve had a good run. Though my back would argue the point.