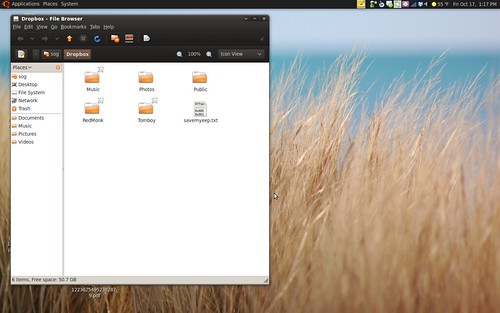 While I’m entirely sure that I’m not the first to have thought of this, I confess to being entirely unaware there was a mechanism for incorporating external assets into your primary Dropbox directory. Instead, I was operating under the assumption that Dropbox would only synchronize that directory and only that directory’s contents. If I wanted to pull in /home/sog/Music, then, I had two choices: a.) move it into the Dropbox folder, or b.) make Dropbox synchronize the parent directory – in this case, /home/sog.

If the latter were an option, frankly, I would be doing just that, because it would be nice to have my home directory mirrored on the other machines I use. But even at the premium, for pay level – which I have purchased – I’m only given 50 GBs to work with, which isn’t enough. So that option is out. And moving my music directory around would break my library, my eMusic download path, and a couple of other things: not unrecoverable, but inconvenient.

Instead, what I’d like to do is leave the Dropbox directory alone, but have it yank in a few select external folders to be synced. Which can be done, fortunately enough.

All you have to do (on Linux, anyway) is create a symlink from the Dropbox directory to the folder you want to incorporate. Here’s how you do that:

Otherwise, enjoy: I hope this helps.