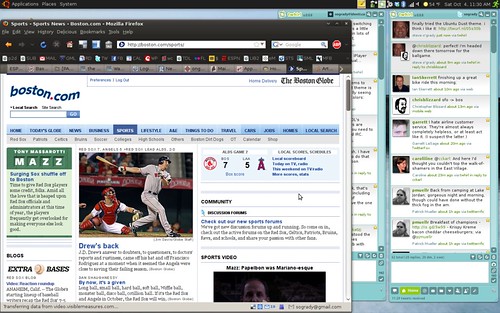 “The big win is saying ‘screw you’ to KDE and Gnome and all those crap Linux interfaces and APIs.” – John Gruber, Daring Fireball

Just last week, I mentioned that when it came to Apple, there was no one whose commentary I respected more than John Gruber’s. Ironic, then, as he made his commentary on everything else invisible to me the very next week. Sad, too.

As a full time user of a GNOME desktop, part time user of a KDE desktop (it lives in a Kubuntu virtual image I maintain), I take exception to Gruber’s characterization. And were I one of the developers, I would likely take strong exception. Not because I believe it’s the equal of his preferred Mac UI; it is not, for most users. Not because I think it can be, as pictured, a very attractive and functional desktop, though it is. Nor because, as Luis argues, it is decidedly unclear that the Android UI – which debuted to decidedly mixed reviews – could so suddenly eclipse the technologies Gruber dismisses with a single sentence.

I disagree with his analysis, rather, because it seems to contradict the available evidence. True, the APIs have their issues – ABI breakage, redundancy and so on. But what platform’s API story is perfect? Carbon vs Cocoa, anyone?

Besides, if the Linux desktop APIs were designed as poorly as Gruber argues, we would expect to seem a commensurate decrease in investments in them. Instead, I’m seeing the reverse. Though I beat them up about their inability to sim ship, Adobe is actively producing versions of AIR and Flash for Linux. Google releases versions of Desktop, Earth, and Picasa for Linux. Amazon’s MP3 store has a Linux front end. Intel bought our friends from OpenedHand for a reason. Hell, even IBM – as conservative a platform targeter as there is – is supporting Notes and Symphony on Linux.

Even if one agrees with the above assessment of the Linux desktop APIs, then, it’s difficult to conclude that the above energies would be likely candidates for a sudden redirection onto Android. Assuming, of course, that that platform is superior, which I’m very far from allowing.

Much as I disagree with Gruber on this point, however, I do believe that GNOME is missing an opportunity. As anyone who’s spoken with me on the subject of the Online Desktop will know.

I’m still catching up on the output from the GNOME Summit that I blew through on Sunday, but the fact that GNOME – like virtually every other desktop on the planet – still considers the network as an optional or edge condition smells to me of opportunity lost. As Ray Ozzie once put it:

The real question is (that) if you were going to design an OS today, what would it look like? The OS that we’re using today is kind of in the model of a 70’s or 80’s vintage workstation. It was designed for a LAN, it’s got this great display, and a mouse, and all this stuff, but it’s not inherently designed for the internet.

Precisely. And though he was speaking of Windows, presumably, the same might be said of GNOME. Or OS X for that matter, but that’s a discussion for another day.

GNOME still holds the network at arms length, declining to bake the network in at a low, API level. I’ve mentioned previously trivial examples like a “Change Desktop Background” that leveraged Flickr or a Banshee (or Rhythmbox, if you prefer) that stored music on the cloud and integrated eMusic. And now we have emerging services like Stitcho (Windows/Mac only, please note), described by (new Moz employee) Dion as “Growl for the web,” which aims to give web based applications a pipe back onto the desktop – making them first class citizens, in a sense.

Further blurring the line between web and desktop. Which GNOME isn’t, to my eye, doing much of – with the exception of, say, network chess (I’ve heard and seen little from GOD since Havoc left for Litl).

Network awareness need not be a dependency, as some fear, because no one’s arguing that GNOME should become a thin client front end. But it seems self-evident to me that the network could be imbued at the most basic levels of GNOME, in ways that Apple or Microsoft could not, or more properly would not wish to, match.

That GNOME developers are hesitant to embrace services like Google and Flickr so intimately should not come as a surprise: they are not – by and large – free and open in the way that GNOME is. But while we can debate whether or not it should be, the fact is that freedom simply is not the priority for users that it is for developers.

Which naturally might lead to this question: who’s right? Natural though that might be, that is also in my view a wrong question, mostly because it just as inevitably leads to a philosophical quagmire. Better to ask whether or not free and open alternatives to popular services like Flickr and Google are anticipated in the near future, and if not, whether GNOME is best suited by waiting for them to arrive, or building them an optimized desktop in advance of the day when they do.

Utilizing, obviously, the non-free alternatives in the meantime.

My words, I’m sure, betray my opinion on that subject, just as Gruber’s did his. Not that I expect either to have much impact on the GNOME community, of course; I periodically need to vent on this subject as a user.

In other words, it’s just my two cents.