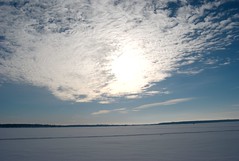 It’s been a cloudy few weeks. Literally, of course, because of the storms that perpetually stalk me on my peripatetic wanderings, but figuratively as well. In between the UFOs on the History Channel and the Orange County Choppers on Discovery served up (I have to think with a mixture of realism and shame) to patrons of Frontier or JetBlue, it’s been clouds, clouds and more clouds.

There was the Giga Om interview with Microsoft’s Ray Ozzie, of course. And presentations from IBM. Questions for HP. Discussions with Sun. And so on.

All discuss, whether directly or indirectly, a future in which the IT infrastructure is poised to become distinctly non-local. Cloudy, you might say, because whether one appreciates the term cloud computing or not, it doesn’t appear to be going anywhere. Nor particularly at risk of being coopted into meaninglessness, the fate that befell SOA.

While most or perhaps all of the major systems vendors were talking a great deal, and working in a few cases with similarly sized entities, Amazon quietly got on about its business: continuing the relatively rapid evolution of the single most relevant cloud computing infrastructure on the planet. As Ozzie admitted, “[the cloud market] really isn’t being taken seriously right now by anybody except Amazon.” This particular iteration managed to knock off a few more reasons not to use the platform, including the oft-lamented DNS wiring issues.

The differentiation between the major systems’ vendors talk and Amazon’s walk is striking, in availability of course, but more for the design goals. As is their habit, the HP’s and IBM’s and Sun’s of the world are starting from the Fortune 50 or major universities and planning to work backwards, if at all.

That they’re taking this approach should not come as a surprise. It’s in their respective natures, for one. For another, it’s an approach that has made them good money in the past. The margins, after all, are better, even as the volume is most certainly not.

Yet most of the large systems vendor set – Microsoft perhaps better than its competitors, given its history – has come to understand the importance of the developer as it relates to platform success. Witness the sponsorship and presence at open source or other developer oriented events such as David Berlind and Doug Gold’s brainchild, Mashup Camp. If I was to publish a list of subjects were frequently asked about, reaching and interacting with developers would top it, or nearly so.

Which makes the current divide between Amazon’s cloud strategy and that of the major vendors, frankly, perplexing. If there’s a better long term strategy for attracting and retaining individual developers than making hardware and software deployments push button simple to anyone with a credit card, I’ve yet to hear it.
The barriers to entry are exceedingly low, while the retention rates will be conversely high. Consider a simple example: backup to Amazon’s S3. Inserting information into the platform is easy via script or GUI, ensuring that the point A to point B time is low. But the incremental accumulation of data on the platform actively disincents a departure for a competing service; it’s like a catastrophically messy basement or garage is in that respect. You could move to a better house, but you’d have to clean the garage first. And who wants to do that?

Now nobody is claiming that Amazon’s fledgling stable of CohesiveFT’s, Elastra’s and Enomaly’s is poised to take on IBM’s partner portfolio, any more than anyone is contending that enterprise infrastructures will be entirely cloud based. But there is significant first mover advantage here, from a platform perspective. If you doubt that, ask a few of the virtualization players what they think about VMWare’s positioning from an image format perspective.

It is understandable, of course, that the big firms would prefer to cater to big firms: what Amazon is doing is hard. Systems management is a monumental challenge when the bazaar rather than a few cathedrals is actively creating and destroying machine instances. But what the big firms would prefer to do, in my view, has little or no bearing on what they should do. I’d prefer not to fly all over the country for my job; and if I don’t want the work, I suppose I don’t have to.

We’re going to see cloud based offerings from some if not all of the major systems vendors, without question. As I wrote of Sun following their analyst conference, I don’t think they can afford not to play in the space. Which might explain why cloudcomputing.com resolves to dell.com, as Jim Zemlin recently pointed out to me. If Amazon/eBay/Google/Yahoo offer platforms – and they will, I believe – that in turn become platforms of choice for developers and startups, the bigger systems vendors can more or less count them out as potential customers, and count out the accompanying growth opportunities. The AmBayGoogHoo crowd, after all, have not made themselves players by paying a premium for hardware or software: it is, rather, whitebox and open source all around.

Whoever is next to market with large scale cloud services, much of the success or failure will be predicated on how well the offering can speak to an individual developer (Amazon) versus his employer (everyone else).

Linux, remember, didn’t reach its current heights by focusing from day one on the needs of large organizations. It fought the battle against a larger, infinitely better resourced, and more capable (in the initial stages) incumbent just as Amazon is doing: one developer at a time.

Disclosure: IBM, Microsoft and Sun are RedMonk customers, while Amazon and HP are not.

Leave a Reply to tecosystems » Will There Be Only One Cloud? Cancel reply